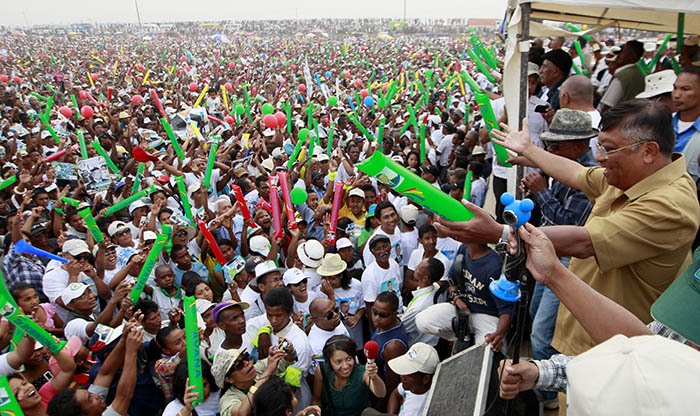 The first round of voting in Madagascar’s post-coup election has finally come to an end. The polling was largely peaceful. Observers quickly called it “free and fair” — despite large numbers of would-be voters being excluded due to problems with the electoral lists — and hailed it as a major step on the path back to democracy.  A group of losing candidates who had been supported by former presidents Albert Zafy and Didier Ratsiraka have called for the results to be nullified, but they will have to route their complaints through the relevant election courts, which are unlikely to uphold them.

Grave risks remain, however. First round provisional results show Jean-Louis Robinson has won the first round (with 21.1 per cent of the vote) followed by Hery Rajaonarimampianina (approximately 15.9 per cent). Barring a major change in the certification of provisional results, these two candidates will advance to the second round on 20 December.

That will almost certainly heighten tensions. Robinson is the proxy candidate for the mouvance Ravalomanana, the organisation of former President Marc Ravalomanana, who hoped to run himself but remains in exile in South Africa. Rajaonarimampianina is the proxy for Andry Rajoelina, the former radio disc jockey who took power in a 2009 coup with the Malagasy army’s help.

Even if the original protagonists are not on the ballot, the proxy candidates represent four years of bottled up frustration and bitter rivalry. With the first round past, the stakes are now much higher. Defeat for either candidate could mean exile or political irrelevance, and economic marginalisation.  Added to this is growing public discontent. Since 2009, self-interested politicians have repeatedly put their own interests before those of the general populace. Madagascar has become increasingly isolated from the international community, with dire consequences for economic growth, development and human security. Lawlessness and deteriorating faith in the criminal justice system manifest in growing vigilantism. In September, a spate of minor bomb attacks in Antananarivo by the Defenders of National Sovereignty, ostensibly protesting the international community’s role in blocking the candidacies of Ravalomanana and Rajoelina, increased fears of instability.

Four years of growing tensions – and an election

Tensions between Rajoelina’s and Ravalomanana’s movements are the product of four years of bad-faith negotiations over the latter’s return. He is now also under South African investigation into alleged crimes against humanity, for which he has been convicted in absentia in Madagascar. Ravalomanana has deliberately turned down an amnesty process that was initiated as part of the transitional roadmap to elections. Although actual prosecution is unlikely, South African courts have effectively grounded him (taking his passport) and scuppered his intentions to return; in so doing, they have enabled the Southern African Development Community (SADC) to renege on its previous demand for his immediate repatriation. But even if SADC had not been involved, the Rajoelina regime was determined to prevent Ravalomanana’s return at all costs, fearing revenge and arguing his presence would be destabilising.

In January, both men agreed to an internationally brokered pledge not to stand as candidates and to accept a “cooling off” period for the good of the country. But at the same time, Ravalomanana brokered a deal through SADC to allow his wife, Lalao, to return to care for her ailing mother. Once back in the country, she announced her presidential candidacy, prompting Rajoelina to claim the “ni-ni” (“neither Ravalomanana nor Rajoelina”) deal was off and that he would be running.

Surprisingly, both Laloa Ravalomanana and Rajoelina were approved as candidates by the electoral court, along with former president Didier Ratsiraka, even though none met the eligibility criteria; neither Ratsiraka nor Ravalomanana had been resident for six months prior to submitting candidate registration papers, and Rajoelina submitted his application after the deadline. In response, the international community withdrew its support—and critically, its election funding—to protest this clear electoral law violation. They demanded the candidates withdraw or that there be a new ruling by the court.

Nothing happened as the timeline for elections in June drew near and passed, with elections rescheduled for August. Then an International Contact Group for Madagascar meeting, in Addis Ababa in late June, witnessed an unprecedented push behind African Union and SADC efforts. (Critics claimed Madagascar’s sovereignty was being violated: SADC’s criticism of the electoral court appeared much more stringent than its more diplomatic positioning on Zimbabwe’s controversial constitutional-court decision to fast-track polls there.) As we described in October, The reconstituted electoral court re-convened and issued a surprise ruling disqualifying Ravalomanana, Rajoelina, former president Didier Ratsiraka and three minor candidates.

The principals’ exclusion resulted in a showdown between proxy candidates. To cynics, this is old wine in new bottles. To optimists, it is an opportunity for new political growth, without the emotional attachments that have become so palpable in the four year-long Ravalomanana-Rajoelina showdown.

Despite a smooth first round, there are no institutional guarantees or candidate pledges to accept the runoff results. Lip service continues to be paid to the interests of ordinary Malagasies, but it is the dynamics within and between the political and business elites and the security services that will ultimately determine the outcome.

On to the second round

Madagascar has a history of large-scale protests when power is at stake. Street-level protests culminated in the 2009 coup, and a similar series of events could sprout from a manipulated or just badly managed election. Furthermore, even if the runoff proceeds smoothly there is a high risk the loser will call on supporters to turn to the streets or ask allies within the military to step in.

The Defenders of National Sovereignty attacks make matters worse. While it is unclear whether the group backs a particular candidate or mouvance, the crude explosive devices (they caused minimal damage and one bombmaker accidentally killed himself) have exacerbated the insecurity. Understandable fears could keep voter turnout in the second round low and thus reduce the legitimacy of the result.

All in all, the chance of a smooth second round acceptable to all Malagasies as legitimate is remote.  How they respond to irregularities will determine whether the country is plunged back into crisis. The logistical problems of holding a vote on a large island with poor infrastructure heighten this risk. Many ballots must be transported overland, an enormous logistical exercise—in the first round, provisional results were not announced until 8 November, two full weeks after voting. Some ballot boxes will have to be left unguarded, as there are not enough security personnel to oversee the almost 20,000 polling locations. Only about one in five stations will have security.

The international community in general should insist that, whatever happens after the second round, the rights of the losing candidate are respected.  Madagascar’s last two transfers of power have involved forced exile. Were defeated candidates to know they would be allowed to stay in Madagascar and might even have a voice in the new government, the electoral temperature would be lowered.

The international community should also use its influence to calm the military, which has acted as an interventionist kingmaker and could again. While a takeover appears unlikely, the 2009 coup was sparked by a minor mutiny by mid-level soldiers that prompted the involvement of more senior officers. Similar dynamics could arise again, particularly if mass protests get out of control and deteriorating security justifies intervention. Such a scenario is unlikely to result in a military regime — the army historically has conferred power on its preferred civilian –  but would most likely lead to further international isolation and continued crisis.

These concerns are hard to manage and tricky to mitigate. Yet the international community must engage and attempt to prevent a post-electoral crisis. The December vote represents a genuine opportunity for a more hopeful and inclusive political order. This is only possible if support continues beyond the elections and translates into genuine efforts to build responsive, accountable state institutions and promote political and economic policies that spread benefits beyond the narrow elite. It’s a tall order in a country where political fault lines and poor governance are entrenched. But there is still hope that Madagascar’s elections will herald a new chapter in the country’s troubled history.