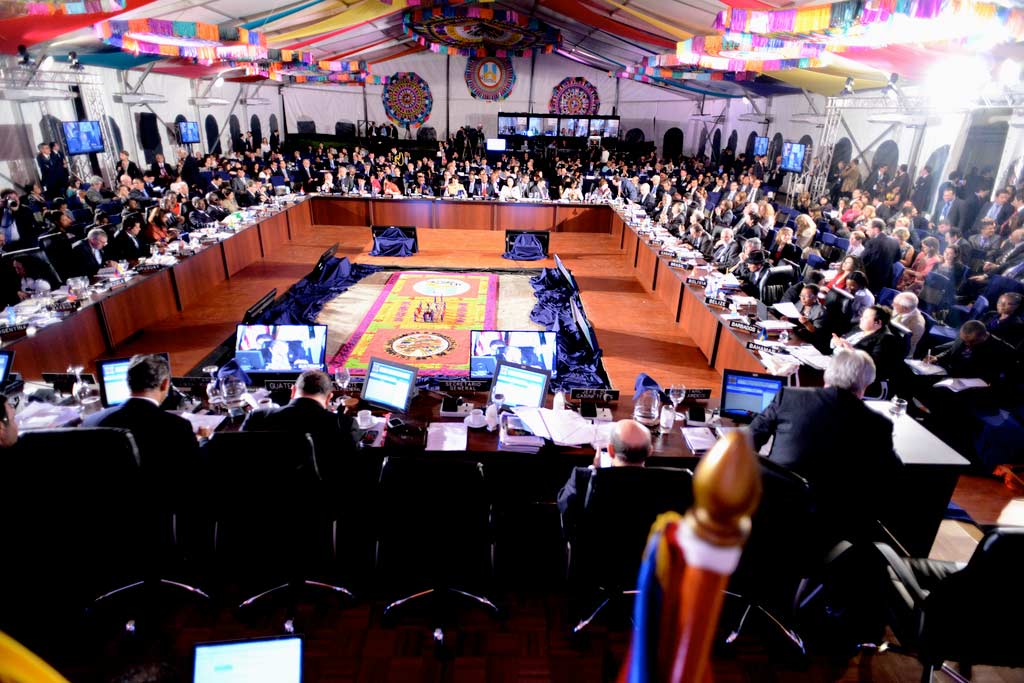 Representatives from 34 countries gathered in Guatemala 4-6 June for a hemispheric meeting focused on international drugs policy. Expectations among some drug-law reform advocates were high following publication of a report by the Organization of American States (OAS) cautiously suggesting that member states “assess” trends towards the “decriminalisation or legalisation of the production, sale and use of marijuana”. But the OAS annual meeting ended with a final statement that avoided controversial topics such as drug legalisation.

What did the OAS General Assembly accomplish? Are Latin American governments headed towards comprehensive reform? Crisis Group senior analyst Mary Speck (@speckmary) discusses the ongoing debate on drugs policy in Latin America and the challenges ahead.

Q – Drug trafficking has been a major regional issue since South America became the major source for cocaine sold in the United States in the 1980s. Why have hemispheric leaders decided to focus on the problem now?

Unhappiness with what became known as the “war on drugs” has been brewing in Latin America for years, especially as killings associated with the illegal trade have increased. Though violence in Latin America is a complex problem with multiple causes, many deaths, particularly in so-called transit countries, are associated with this aspect of organised crime. The “northern triangle” of Central America – Guatemala, Honduras and El Salvador – has some of the highest homicide rates in the world. Mexico has suffered a wave of drug-related violence since then-President Felipe Calderon sent the army to combat drug cartels in 2006. Estimates of those killed in that country now range from 47,000 to 70,000. Colombia, despite having broken up powerful cartels and curtailed coca production, still suffers rising violence in regions where traffickers and other criminal groups remain most active, such as the Valle de Cauca.

In 2009, a blue-ribbon commission headed by three former Latin American presidents stated that international drug policies, promoted by U.S. leaders concerned with domestic use, had failed not only to stem the flow of illegal drugs but also to curb the power of criminal groups that posed a growing threat to the region’s still fragile democracies. In 2011 a global commission, including ex-heads of state, a former UN secretary-general, and Crisis Group President Louise Arbour, called for “science-based discussion about humane and effective ways to reduce the harm caused by drugs”. Sitting presidents took up the issue in 2012: Guatemalan President Otto Pérez Molina, a former general who won office on a law-and-order campaign, surprised many of his own supporters when, shortly after taking office, he suggested that illicit drugs should be legalised and subjected to government regulation, just like alcohol or tobacco. Colombian President Juan Manuel Santos, calling for international debate on the issue, persuaded the OAS during its 2012 General Assembly in Cartagena to commission a study that would “explore new approaches” to the global drug problem. The resulting report was considered at the 2013 General Assembly.

OAS Secretary General José Miguel Insulza presented the report not as a blueprint for reform but as “the start of a long-awaited discussion”. It has two parts: an analysis of drug use, production, transit and trafficking in the Americas today and a description of how the drug situation is likely to evolve in the future. This second, forward-looking portion of the report consists of four possible “scenarios” that are meant to help encourage debate among heads of state, and other policymakers and stakeholders. Although media reports have focused on the inclusion of marijuana legalisation in one of these scenarios, the study did not include specific recommendations.

The “Together” scenario assumes that governments continue a law enforcement approach by targeting high-level traffickers while simultaneously strengthening law enforcement and judicial institutions. The report concluded that such an approach might mitigate violence and corruption over the next decade, but also warned that progress would likely be slow and uneven, both within and between states. Traffickers might shift their activities to countries or local jurisdictions where institutional capacity is limited and resources are lacking.

The “Pathways” scenario explores a future in which some governments experiment with the decriminalisation (meaning the removal of criminal penalties) or the legalisation and regulation of certain drugs, starting with marijuana and unprocessed coca, allowing them to re-allocate resources from law enforcement to prevention and treatment. This approach, the report suggests, might lead to tension between countries experimenting with new approaches and those deciding that drugs should remain illegal.

Under the “Resilience” scenario, leaders would take a bottom-up approach, focusing on strengthening public safety, education and health at the local level. Communities would be encouraged to take an active role in fighting crime, gang violence and drug addiction. But, the report cautions, lack of resources and institutional capacity at the local level would likely make progress slow and difficult to sustain.

The “Disruption” scenario describes a situation in which producer and transit countries decide the costs of combating trafficking have become unbearable and some of their political leaders reach tacit agreements with criminal groups that consequently penetrate or capture state institutions. Violence would go down, the report suggests, but at the cost of rising corruption and an increase in international tensions, as drug-consuming countries accuse producing and transit nations of not complying with their international legal obligations.

Q – What is the position of the U.S. government? Is there a North-South divide over drug policy?

The Obama administration remains opposed to de-criminalising or legalising drug cultivation, trafficking or consumption. While praising the OAS report as a “serious contribution” to the international debate, Secretary of State John Kerry on 5 June reminded member states of their obligation to uphold international law and to recognise the “impact of domestic decisions on [their] neighbours”. U.S. officials also say that the “drug war” paradigm no longer reflects their government’s approach to illegal narcotics, which now stresses prevention and treatment along with eradication and interdiction. Kerry told OAS members that the U.S. government accepted its “shared responsibility” for the drug problem and had reduced cocaine use by 50 percent over the past five years (although marijuana consumption, according to U.S. statistics, has increased).

While drug prohibition remains U.S. federal policy, change is occurring in several U.S. states with respect to marijuana. In November 2012, voters in Colorado and Washington approved initiatives to legalise, regulate and tax marijuana (though voters in three other states rejected similar proposals). Eighteen states have passed laws allowing the medical use of marijuana and many have decriminalised the possession of small amounts of that drug, albeit with certain restrictions, such as use by minors.

Such measures are also gaining traction in parts of Latin America. Argentina, Chile, Colombia and Mexico have lifted criminal penalties, either by law or in practice, for possession of certain drugs. In June 2012, Uruguayan President José Mujica proposed the most radical reform yet, sending a bill to the legislature that would have created a state monopoly on the production and distribution of marijuana. But Mujica withdrew the bill in December when opinion polls showed the majority of Uruguayans opposed legalisation.

Lack of public support helps explain why many Latin American leaders approach the issue of drug policy reform, even regarding marijuana, with caution. There has been little debate of the pros and cons of decriminalisation/legalisation/regulation at the domestic level. Some also question whether such initiatives would weaken criminal groups and reduce violence, given the drug cartels’ ability to diversify into activities such as extortion, prostitution, human trafficking and even mineral and oil theft. Countries starting to grapple with drug consumption –such as Brazil, which faces a crack cocaine epidemic – worry that easing prohibition could exacerbate the problem of drug addiction, straining already limited public health resources.

Q – So what is the significance of the OAS meeting? Did it change anything? What is the path going forward?

Several years ago, few would have thought the OAS would be open to consideration of new approaches toward illegal drugs, thereby questioning decades-long policies that have focused primarily on the concerns of major consuming countries such as the U.S. The issue of drug-policy reform has gone mainstream more rapidly than most could have predicted. But forging regional consensus around an issue that affects different countries in different ways will not be easy. The OAS has agreed to keep the issue at the top of its agenda. In the General Assembly’s final declaration, members instructed the Permanent Council to call an extraordinary session on the topic of drug reform before the end of 2014. In the meantime, national and regional groups are to discuss alternative strategies, and in November 2013 public-security ministers will meet in Medellin, Colombia. The goal is to have specific policies ready before a special UN General Assembly on drugs convenes in 2016.

The language of drug policy is changing, not least because the cost in deadly violence and the risk to democratic institutions in Central and South American states are rising: Harm reduction, public health and regulation are increasingly becoming operative key words, paralleling eradication, interdiction and enforcement. What this will mean in terms of national and international policy remains to be seen.