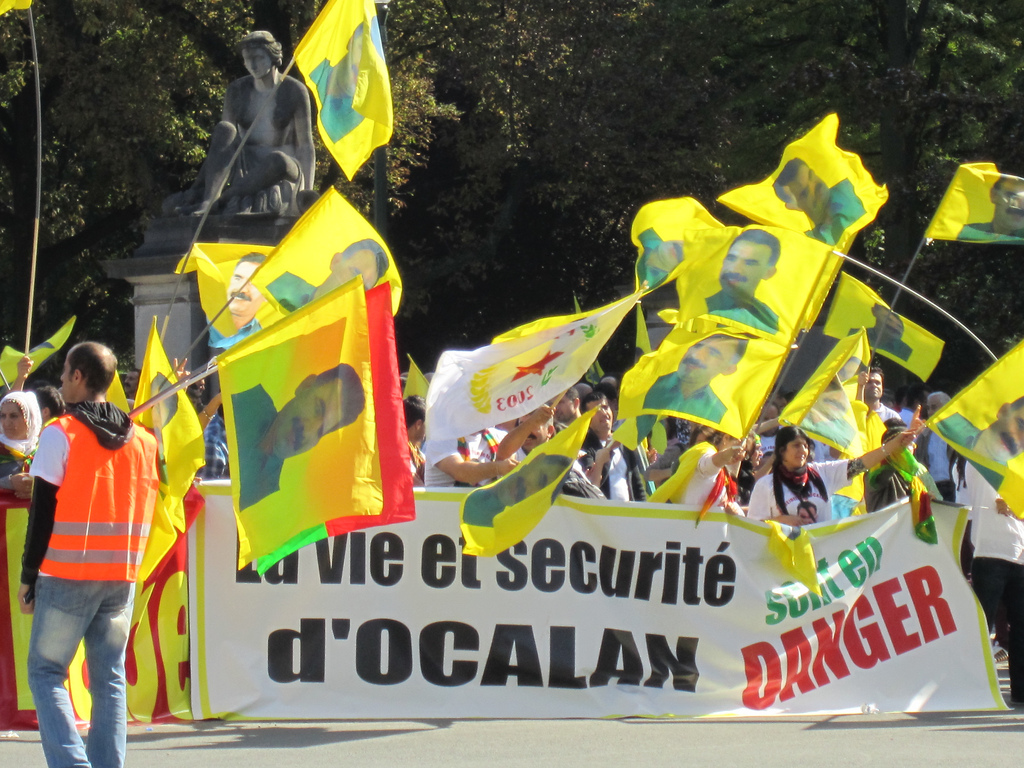 Many people in Turkey, including myself, feel cautiously optimistic about the latest round of peace talks which began in late 2012 between the Turkish state and Abdullah Öcalan, the jailed leader of the insurgent Kurdistan Workers’ Party (PKK). When I observed a Kurdish movement conference in Switzerland in February, I found real openness to a settlement of the 30-year-old PKK-Turkey conflict among those present, including hard-line Kurdish activists from Turkey, the Middle East and Europe. But, just like the Turkish government, they are all asking themselves the same question: “this time, is the other side sincere? Will it really commit to a compromise deal?”

While the temperatures in snow-covered Berne were well below freezing, heated discussions and emotional speeches on the causes and solutions of Turkey’s Kurdish issue kept around a hundred participants adequately warm in the staid concert hall that housed the public conference. The event also coincided with what participants heralded as a “historic day” as three members of the pro-Kurdish Peace and Democracy Party (BDP) were allowed by the state, as part of ongoing peace talks, to visit Öcalan in his İmralı island prison. However, the notes of that meeting, subsequently leaked to the media, showed that Öcalan’s views are not yet in sync with those being espoused by Kurdish movement activists. A few days after the publication of the notes, Murat Karayılan, the commander of PKK forces headquartered in the Qandil mountains in northern Iraq, told reporters that “we really trust our leader [Öcalan]… but … there are some points we have to think about”. But, having seen the core Kurdish movement’s reverence for the PKK’s jailed leader, I left convinced that they would follow his lead.

Turkey’s Kurds generally share the same basic demands — such as granting full rights to education and public services in mother languages and lowering the electoral threshold for a party to enter parliament from 10 per cent to at most 5 per cent. Luckily, most Turks also see these as acceptable. After all, lowering the threshold will make Turkish democracy more representative in general. The country’s main official language will remain Turkish, and it is clearly under no threat. For instance, even this conference on the Kurdish issue in Europe was held in Turkish and English. Some participants spoke out emotionally in Kurmanji Kurdish, used by most Kurds in Turkey, demanding translations for non-Kurdish speakers like myself. Our earphones went silent, however, when one elderly gentleman asked a long question. The Kurdish translator then said, “I’m sorry. He is speaking Sorani [Kurdish from Iraq]. I don’t understand.”

But there are also many differences of emphasis within the Kurdish movement. For instance, a Kurdish member of Turkey’s parliament speaking at the conference expressed joy that the BDP was finally allowed to talk directly to Abdullah Öcalan, but insisted that Öcalan must also be allowed to talk directly to fighters in Qandil. Öcalan is less demanding in his choice of interlocutors, saying that he can meet the same delegation again in a couple of weeks.

One of the Kurds’ strongest demands is the removal of ethnic discrimination from Turkey’s constitution which is currently being re-drafted by a four-party parliamentary commission. But some speakers in Berne wanted explicit recognition of Kurdishness, whereas Öcalan seems to support more neutral language, reportedly telling the BDP delegation that “a state cannot have an ethnicity or a religion”.

I realised once again at the conference that the Kurdish movement’s demand for official recognition of Kurdish identity stems from a feeling of profound discrimination which many Turks are simply not aware of. A Kurdish parliamentary deputy said she received hostile looks in the airport lounge on her way to Switzerland and always has to wait especially long  at Istanbul airport because of extra security checks. I encountered scepticism when I spoke about equal democratic rights for Kurds. “How are you able to do that as a Turk?” one Kurdish participant asked me, genuinely puzzled.

On the question of legal and judicial reforms – vital to secure the release of several thousand non-violent Kurdish elected officials and activists held on catch-all “terrorism” charges – Öcalan reportedly told the BDP delegation, “We’re in talks with the state. Don’t be pessimistic”. Kurdish movement delegates at the conference said it was good to hear news that an imminent new anti-terrorism law will remove articles that confuse free speech with terrorism, but that it was not enough, since it would only release 300 to 400 detained Kurdish activists. They insisted that the new law also rule out public statements as evidence of “membership in a terrorist organisation,” which most of the activists are charged with.

Similarly, on the issue of decentralisation and local governance – an area where over-centralised Turkey clearly needs to modernise – the Kurdish movement seemed divided. Öcalan told the BDP delegation that the future of Turkey’s Kurds lies in a new, more democratic Turkish republic, and that if the Kurdish movement continued to demand “democratic autonomy” it would be “sabotaging” the talks. But Kurdish movement speakers at our meeting insisted on “democratic autonomy” or self-determination, terms whose vagueness fuels Turkish fears that Kurds still want an independent state. “If not democratic autonomy, then what?  How can we go 180 degrees on our demands so quickly?” a hard-line activist asked me. “The question is not whether Kurds can sustain themselves economically in a separate state. We have the resources. But we choose to live with Turks.”

Still, during a weekend of repeated angry interventions about Turkey and the Turkish government, and no words of solidarity with their Turkish compatriots, I began to wonder whether the Kurdish movement really wants to live with Turks. Indeed, a 42-year-old man sitting next to me reminded me that there are also hardliners for whom nothing short of an independent Kurdistan will suffice – even though this does not seem to be the prevalent view among Turkey’s Kurds. He was a former PKK militant who had joined the armed insurgency at the age of seventeen after security forces forcibly evacuated his village in southeastern Turkey. He was based in the PKK’s Qandil headquarters until three years ago, when he was sent to Europe due to health problems. He dismissed reports that insurgents were weary of their hard life. “I would go back to continue fighting if I could,” he said. “I can’t go back to Turkey after everything I have seen — villages bombed, children and women killed. I’ll only go back if they give us Kurdistan. That is what will happen eventually!”

Above all, I realized once again that to attain sustainable peace, both sides would have to overcome a deep lack of trust. After years of unfulfilled promises, Kurds are highly suspicious of the intentions of the ruling Justice and Development Party (AKP) in the talks and accuse it of employing stalling tactics. There were constant references to events like the Roboski/Uludere incident in December 2011 (where Turkish jets killed 34 Kurdish villagers) and the murder of three PKK women in Paris on 9 January 2013 (which investigators say was probably not political, but Kurds still believe was the work of “the Turkish deep state”). Several people warned of an impending disaster if this latest round of talks fails, similar to Öcalan’s threats in the İmralı meeting notes to unleash 50,000 fighters against the Turkish state.

Among themselves, Kurdish activists switch to a language unknown to Turks, and I don’t mean Kurdish. Conference speakers spoke of Öcalan with deep veneration, referred to his capture and imprisonment in 1999 as an “international conspiracy,” and even implicitly compared him to South Africa’s Nobel Peace Prize winner president Nelson Mandela, who was once jailed as a terrorist too. As an analyst I listened with detachment, but as a Turk with a lifetime’s exposure to anti-PKK propaganda, I felt shock and an inner resistance automatically bubbling up against this rhetoric. Interestingly, senior Turkish officials now tell Crisis Group that the principal reason for allowing the current talks to start is their belief that Öcalan – notorious for the PKK’s terrorist attacks and liquidation of internal opponents – has sincerely changed and wishes to end the violence, and that Ankara now wants to give him a chance to persuade radical Kurdish factions to think the same. If Öcalan really is a man to strike a peace deal now, mainstream Turkish media will need to wean itself away from gruesome monikers like “terrorist gang chieftain” and “baby killer”.

Ultimately, despite the differences I observed within the Kurdish movement, I left Switzerland feeling that most Kurds, including the hardliners, would back the latest peace efforts if there is an open process supported by real reforms from Ankara and combined with Öcalan’s power of persuasion over his base. Even though everyone insisted that the insurgency was still strong, they nonetheless seemed disheartened by continued stalemate after years of struggle, and by the many previous mistakes and failures on both sides. A frail Kurdish woman in her early thirties told me she had joined the PKK at thirteen, but had been sent to Europe because she suffered from severe bone disease. Her voice burst with excitement when she spoke about a possible amnesty so she could go back to Turkey and see her parents at last. “Of course we all want peace” she said. “Don’t you?”

Didem Akyel is the Crisis Group Turkey Analyst, based in Istanbul, Turkey.