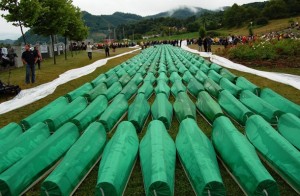 Seventeen years ago Serbian forces took control of the United Nations safe area of Srebrenica and over the course of the following week killed about eight thousand men and boys while expelling its entire Bosniak population. Some of the victims died trying to escape (a column fought its way out through Serb lines). Most perished in mass executions of up to one thousand at a time. The corpses were then buried and months later, re-buried to hide the evidence, so that even today they are still being found in the hills and forests of eastern Bosnia. All this is being retold these days at the trial of Ratko Mladić, at the International Criminal Tribunal for former Yugoslavia.

So I was shocked yesterday to open my Facebook page to a nauseating photograph, posted by a northern Kosovo Serb group, of a man waving a huge flag with Mladić’s photo and announcing “Happy 11 July, day of liberation of Srebrenica”.

What is behind this? Even hard-bitten nationalists admit these days that what Serbs did in Srebrenica was “a terrible crime” and a stain on the conscience of the nation, though they eschew the word genocide.

Is there now a new generation of Serb youth who never lived through the war and have bought the lie that Srebrenica is a fraud? That not only was there no genocide, but no crime against humanity, in effect nothing to be ashamed of at all? At least nothing worse than what happened to Serbs elsewhere?

I don’t know. The kids in north Kosovo are under a lot of pressure. Too young to be guilty of much of anything themselves, they’ve grown up with an oversized sense of victimhood. Many of them are refugees from the south of Kosovo or from Croatia (whence great numbers fled in 1995). For reasons no one can really explain to them and no one really tries, they are no longer in Serbia and are now in Kosovo. They think they’re loyal citizens of Serbia, and the world tells them they’re rebels and extremists who need NATO troops to patrol their neighborhoods. Their fear and rage are understandable. When they wave Mladić flags, it’s disgusting and wrong, but the story doesn’t end there.

Senior Serb leaders share a lot of responsibility for that flag-waving. Some act as though the crimes in Srebrenica have nothing to do with them and “let’s think about the future” instead. Others flirt with repulsive justifications and evasions, probably to win votes from people who only wish Mladić had killed more Bosniaks. Mostly, if Serb leaders speak of Srebrenica at all, they give the impression that they do so unwillingly, uncomfortably, perhaps coerced by foreigners.

The irony is that it’s in the interest of the Serb leadership, particularly in Bosnia and Herzegovina, to be clear and unequivocal about what happened in Srebrenica. Bosnia’s Republika Srpska (RS) has never had a leadership as innocent, at its top levels, of involvement in the massacre as today. I am pretty sure that RS President Milorad Dodik and his close advisors truly believe it was a horrible crime, yet they refuse to be open about it (for more on the RS leadership’s attitude to Srebrenica and what they should say about it see Crisis Group report No214, What does Republika Srpska Want?, 6 October 2011).

It would mean so much, for the families of the victims and for the cathartic health of Serbs everywhere, all the way to the barricades around Mitrovica, for Serb leaders to say – not once and not quietly but with conviction and again and again – that what happened in Srebrenica 17 years ago was the worst crime on European soil in half a century, that they share the pain of those left behind and the shame of those responsible.

Marko Prelec is Director of Crisis Group’s Balkans Project, covering Bosnia and Herzegovina, Kosovo and Macedonia. A graduate of Harvard College with a Ph.D. in modern Yugoslav history from Yale University (1997), Marko taught history at the U.S. Naval Academy in Annapolis in 1998 and 1999. From 1999 to 2005 he worked as a Research Officer in the Office of the Prosecutor of the International Criminal Tribunal for the former Yugoslavia. In 2005, he established the Research and Analysis Section of the Prosecutor’s Office of Bosnia and Herzegovina and served as its leader, supervising research into crimes committed against each of the communities in Bosnia and Herzegovina. He is fluent in English and Serbo-Croatian, and conversational in French.

For more information on the Balkans please visit our regional page where you can find our reports, commentaries, podcasts, and much more.