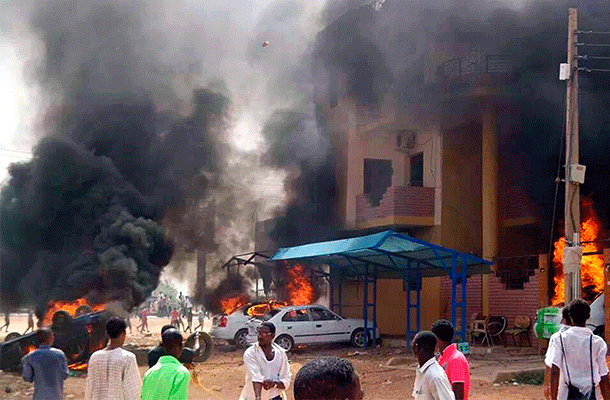 Cars burn in front of a building during protests over fuel subsidy cuts in Khartoum September 25, 2013. PHOTO: Reuters/Mohamed Nureldin Abdallah

On 23 September, the Sudanese government ended long-standing fuel subsidies, triggering widespread unrest. After a week, order was re-imposed, but not without significant loss of life: the government has acknowledged 70 deaths; other assessments, including by the (non-governmental) Sudan Doctor’s Union, put the figure at 200 or more.

Unified by economic grievances, the protesters were a more diverse group, socially and geographically, than in earlier incidents, such as in the summer of 2012. They were not just from poor urban neighbourhoods in and around the “three towns” agglomeration of Khartoum, Khartoum Bahri,  and Omdurman – an area largely populated by internal migrants from war-torn regions like Darfur and Nuba. This time protesters also came from Khartoum’s new middle-class neighbourhoods, where, with 40 percent inflation and the end of the petrodollar era, people have seen their wealth evaporate and their college-graduate sons and daughters languish in unemployment.

Away from Khartoum, other population centres experienced significant unrest. These included leftist strongholds such as the ethnically diverse farming town of Wad Medani in Gezira and the historic trades-union centre of Atbara. The rapidly urbanizing cities of the peripheries – Port Sudan and Nyala, the last of which, with 1.6 million people (300,000 of whom are internally displaced), has become Sudan’s second city – also saw unrest.

That the protests were a reaction to hardships triggered by the ending of subsidies – and were aimed at the government – is beyond doubt. However, disgruntled factions within the ruling National Congress Party (NCP) are also said to have aggravated the unrest.

Sudan’s government is renowned for the factional gyrations around President Omar al-Bashir of three distinct but interconnected interest groups: the armed forces; the intelligence and security services; and the increasingly divided Islamic movement. Each bloc is rumoured to have used the protests as a means to advance its position, even to the extent of internal sabotage to provoke more brutal, politically divisive repression.

The National Congress Party has been roiled for months now by the intrigue surrounding a keenly anticipated, but not yet materialised, reshuffle expected to remove high-profile NCP ministers, promote younger Bashir loyalists, and co-opt opposition politicians. A quiet purge of Islamist army officers had already taken place following an alleged coup plot in November 2012.

These intra-NCP struggles have been mainly behind the scenes. The only public dissent by regime insiders came from Islamic Movement “reformists”, led by the well-known intellectual Dr. Ghazi Salaheddin al-Atabani, the standard bearer for younger Islamist-inclined NCP cadres and veterans from jihadi military campaigns in the South. Dr. Ghazi and 31 others addressed a critical memorandum to the president, calling for a reinstatement of subsidies, an end to the violent suppression of protests, and a national reconciliation mechanism including vaguely referenced political opposition forces. In response to this paper challenge, al-Bashir launched an internal NCP investigation of the critics.

Most comment has focused on dissent within the NCP rather than on the belated engagement of opposition parties and civil society organisations, which  seemed unprepared for the strength and spread of popular defiance. Admittedly, known activists not already incarcerated were quickly rounded up and thus unable to take a strong public role. Mainstream  opposition parties like the National Umma Party (NUP) and Popular Congress Party (PCP) urged supporters to join the protests and called for the NCP government to step down (peacefully). The armed opposition, the Sudanese Revolutionary Front, was notably cautious in its statements, conscious that most urban protesters remain hostile towards their cause, especially given the government’s line of blaming a foreign hand for their rebellion.

The immediate prospect is a continuation of the political crisis that has characterised Sudan since the South separated in 2011. The Khartoum regime, devoid of any long-term strategy, relies on short-term tactical feints, including piecemeal deals with rebel factions, to preserve power. But without deeper reforms the net result will be further deterioration in urban living standards, rural impoverishment and the spread and intensification of war in the peripheries.

If anything is salvageable from the week’s bloody riots, it may be increased national support for a comprehensive solution to Sudan’s economic, social, and political problems and a realisation by the embattled regime – not just the “reformist” wing – of the urgent need for a “national dialogue”, including with armed movements, lest the country be engulfed in chaos like its neighbours to the north. Rather than gamble on 2015 elections, the various NCP factions may reckon their best interests, and those of the country at large, would be served by an inclusive transitional government that could undertake hard decisions – like an end to fuel subsidies – with greater legitimacy and support.

But many doubt Sudan’s hard-bitten politicians can consider such alternatives without further incentives to do so. In the meantime, the current trajectory of deepening economic crisis and a diminishing ability to contain urban and rural insurrection  – or to manage the ethnic or religious extremism already propagated – will continue. And given Sudan’s modern history, a military coup is always a possibility. External players must weigh these realities and use their few policy tools – debt relief, lifting of sanctions, and normalisation of relations – to encourage the NCP to launch a managed reform process with the opposition. For all concerned, the choice is stark: major reform or more war.

Cedric Barnes joined Crisis Group in December 2012 as Horn of Africa Project Director, and oversees research and advocacy activities in Kenya, Uganda, Ethiopia, Eritrea, Somalia, Sudan, and South Sudan. He holds a Doctorate in African History from University of Cambridge, and a Masters’ degree from the School of Oriental and African Studies (SOAS), University of London, where he also researched and taught for five years. From 2007 until 2012 Cedric was Principal Research Analyst for the Horn of Africa at the UK Foreign and Commonwealth Office, with short-term postings in Kenya, Ethiopia and Eritrea. Cedric is a Research Associate at SOAS, and Fellow of the Rift Valley Institute.