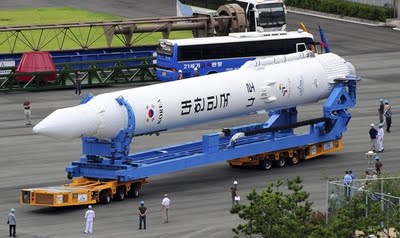 During a recent visit to Beijing, I was reminded that many Chinese believe the U.S.-Japan and U.S.-ROK alliances are aimed at containing China. My Chinese friends also confirmed what I’ve been reading: there appears to be a growing perception that the United States benefits from rising tensions in East Asia. I find this Chinese perspective quite puzzling. Although some cynical critics of the U.S. “military-industrial complex” stress that certain defense firms are poised to boost revenues through increased arms sales to the region, the threat of an armed conflict in the region puts much greater national economic benefits at risk. I do not believe rising tension in East Asia is in the U.S. national interest, and I do not believe it is welcomed or encouraged by senior American government officials.

Many Chinese analysts believe the U.S. encouraged or pushed South Korea to adopt the New Missile Guidelines (NMG) that extend the maximum range of its ballistic missiles to 800km with a 500kg payload. The extended missile range fits the Chinese narrative regarding the U.S. “pivot” or “re-balancing” to East Asia, which generally is described as a military build-up that could become an obstacle to China’s peaceful rise and the restoration of China’s rightful position following a century of humiliation and turmoil. Granted, Washington’s announcement of its pivot strategy coincided with an increase of maritime disputes in the region, but South Korea’s NMG should not be perceived as being aimed at China.

The evidence and facts behind the U.S-ROK missile talks reveal a contentious dialogue on topics of divergent interests—not a harmonious coordination of identical policy positions. Some Chinese friends told me “the U.S. could have stopped South Korea from adopting the new missile guidelines.” I suppose they are correct, but it would have been at a tremendous cost to the U.S.-ROK bilateral relationship. Once the ROK decided it would issue the NMG, it was in the interest of both Seoul and Washington to close ranks and project a unified position, which is part of smart management in strong and mature alliances.

As mentioned in a previous blog entry, South Korea has been interested in extended ballistic missile ranges since the early 1990s when North Korea was testing its medium-range Nodong. U.S.-ROK bilateral missile talks began in 1995 and the U.S. consistently declined South Korean requests to extend ROK missile ranges beyond Missile Technology Control Regime (MTCR) guidelines. So why would Washington’s position suddenly change in 2012? Granted, some Chinese analysts believe the ROK’s new missile guidelines are aimed at the DPRK, but others believe the U.S. “pivot” is driving Washington to goad its allies into providing more resources in the big power game of containing China.

An alternative explanation is that U.S. and ROK interests diverged to some degree, and South Korea’s NMG was a compromise solution that avoided even worse outcomes. For example, the ROK initially requested an extended ballistic missile range of at least 1,000km. Some conservative activist groups such as the People for the Restoration of Missile Sovereignty (미사일 主權 回復을 위한 市民모임) and the Patriotism Alliance (愛國主義連帶) believe there should be no range or payload restrictions at all.

Many U.S. military planners welcome additional alliance assets in the context of managing security on the peninsula and deterring North Korea, or defeating the DPRK in a war in case deterrence fails. However, the U.S. adamantly opposed unlimited ROK missile ranges that would have broad implications for the whole region. Furthermore, the issue of solid fuel was not addressed in the talks leading up to the NMG announcement in October, much to the dismay of South Korea.

The 1979 U.S.-ROK missile agreement also addressed solid rocket propellants, which were used in the Paekkom and Hyŏnmu systems. Apparently, that part of the agreement is still in force, which at least partially explains why the 1979 agreement has not been disclosed to the public even though it was revised when South Korea joined the MTCR in 2001.

South Korea for years has been bristling about the solid rocket fuel restrictions under the 1979 agreement and how it has hindered ROK space launch vehicle (SLV) development. The military advantage of solid propellants is that they are relatively stable, which means they can be used in mobile missile systems and solid-fuel missiles require a much shorter launch preparation time. The down side is that once solid fuels are ignited, the burn cannot be stopped and this makes flight control more difficult. However, solid fuels have a higher thrust density, which means rocket booster requires less volume for an equivalent of delivered thrust.

Apparently, the 1979 agreement limited the total thrust impulse to one million pounds-second, or one million pound*seconds. The solid-fuel KSR-I sounding rocket flight-tested in 1993 produced about 19,500 lbs thrust for 25 seconds, or about 487,500lbs*seconds, which is just under half of the permissible limit. The two-stage solid fuel KSR-II flight-tested in 1997 and 1998 had about the maximum permitted total thrust impulse of one million lbs*seconds. However, the KSR-II, which was 11.1 meters long and weighed two tons, carried a 150kg payload to an altitude of 137.2km. Obviously, this is insufficient to launch a satellite into earth orbit.

Most modern SLVs use both liquid and solid fuel boosters, and the ROK is looking to utilize solid propellants in future Korean SLVs. However, solid rocket propellants were not covered in the talks leading up to the NMG, and the two sides agreed to defer the talks and relegate the solid fuel issue to other government agencies. The U.S. is concerned about the proliferation of missile technologies and Washington wants to see a strong commitment from Seoul to forgo long-range missile development in addition to strict compliance with MTCR export controls.

The Lee government felt pressured to respond to North Korea’s growing nuclear and missile threats, and it had public support to walk away from the MTCR in order to “regain missile sovereignty.” There have also been pressures within the government and conservative groups to retaliate for the 2010 attacks against the Ch’ŏnan military vessel and Yŏnp’yŏng Island, so the New Missile Guidelines are not as bad as some possible alternative measures. The NMG could be offered as a bargaining chip if North Korea decides to engage in serious arms control, and South Korea remains committed to MTCR export control guidelines.

Thanks to Michael Elleman for technical advice and comments.