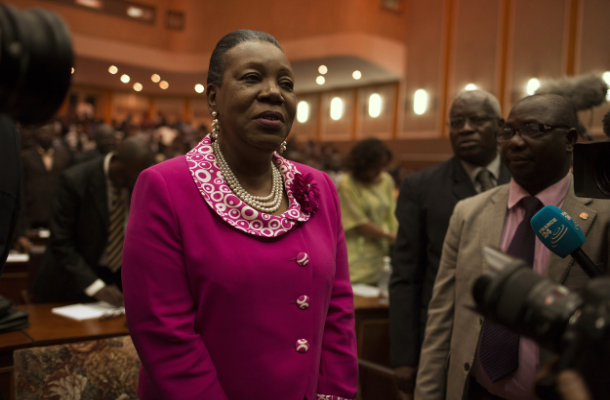 Why did the Economic Community of Central African States force Central African Republic President Michel Djotodia and the prime minister, Nicolas Tiangaye, to resign, opening the way for a new transition?

In 2013, CAR collapsed: the wages of civil servants were paid by foreign donors (notably the government of Congo Brazzaville); security disappeared, and efforts to reinstate it could only be conducted by international forces; there is no government in place and all state services have dissolved. The European Union’s decision yesterday (20 January) to send troops – pending a UN Security Council resolution expected for later this week – indicates that international involvement will only be deepening.

ECCAS sanctioned both the president and the prime minister for the failure of the political transition they were meant to oversee in response to the Seleka coup in March 2013. They were summoned to the ECCAS summit in Ndjamena, Chad, which began on 9 January. That same day, members of the National Transitional Council — CNT, which has 135 members from across the CAR political spectrum and was set up after the Seleka coup as a temporary parliament -were hastily brought to the Chadian capital in order to validate the resignations. The Central African politicians were left with no choice. The two leaders of the transition were accused of not being able to restore order. President Djotodia’s lack of control over the Seleka fighters and his frequently contradictory statements were too much for CAR’s neighbors and for France. Informal consultation among the French authorities and the presidents of the region led to Djotodia’s dismissal.

With the deployment of the French military operation Sangaris in early December, a political solution was clearly needed but the executive duo could not provide one. Tiangaye and Djotodia had not worked well together since the January 2013 peace deal resulted in Tiangaye becoming prime minister. (Djotodia, who had led the Seleka rebels, became president at the end of March after then-president Francois Bozizé was forced to flee.) Over the course of 2013 they failed to establish effective government administration; after the 5 December street battles between Seleka and “anti-balaka” (anti-machete) militias in the CAR capital, Bangui, the government effectively ceased to exist. The prime minister was threatened by Seleka commanders and accused of plotting; three ministers seen as hostile to Seleka were sacked without respect to legal procedure; and Seleka fighters started a brutal retaliation campaign in Bangui that left about 1,000 dead in a few days. Given the chaos in the capital city, the prime minister and the president lost all legitimacy with the public and the support international actors.

What has been the process to replace them?

Both the forced resignation of the president and the prime minister and the process used to select the new transitional authorities show that the Central African Republic is de facto under tutelage. What is called in Bangui the G5 (United Nations, African Union, European Union, France and the United States) is monitoring the process and strongly pushed for some of the criteria. In addition, the G5 convinced the president of the transitional council not to run and followed closely the statements of the presidential candidates. The G5 did not dictate the final choice but clearly influenced the selection process.

Who is Catherine Samba-Panza, the new president?

Among the eight finalists were two sons of former presidents (Patassé and Kolingba); two mayors of Bangui (Catherine Samba-Panza and a former pro-Bozizé mayor); a prominent businessman from Berberati, Raymond Gros-Nakombo; one traditional leader, Maxime-Faustin Mbringa Takama, sultan of Bangassou, in the southeastern province of Mbomou, who claimed to have chased the Seleka away from Bangassou; and one trader.

The most serious candidates were Desire Kolingba, son of former president Kolingba, and Samba-Panza (first round: 64 votes for Samba-Panza and 58 for Kolingba; second round: 75 Samba-Panza and 53 Kolingba). All the candidates had 10 minutes to present themselves and their ideas. The most articulate speech was made by Samba-Panza. She emphasised that she was born in Chad from a Cameroonian father and a Central African mother, making her the “best example of regional integration”. She stated that she will put in place a government of technocrats, with no more than eighteen members and with equal numbers of men and women. In her first speech after being elected, she urged the anti-balaka and Seleka to disarm.

Samba-Panza is the first woman to be president of CAR. She has more of a civil-society than a political background. She comes from the business community and was part of the CAR female lawyers association and the National Council for Mediation. She entered politics during the national dialogue of 2003. She embodies the need for new thinking and the widespread rejection of the political establishment, who “ruined the country” (a phrase used by several of the presidential candidates). Her election was well received by foreign donors and CAR civil society but may not be appreciated by the armed groups. Some anti-balaka leaders gathered in support of another candidate, the pro-Bozizé former mayor, and in the coming days tension is expected in Bangui. French and African forces have already intensified their surveillance of the city.

What can we expect from a new transition?

Right now everybody is wondering who will be in the third transitional government, knowing that stability and effectiveness will depend on its composition. Given that the selection process for the president faced criticism, the new government will have to incorporate the main political forces. If not, the heads of the political parties, who were excluded from the presidential race, will seek to destabilize the Samba-Panza government. Pro-Bozizé politicians, for instance, would not hesitate to mobilise the streets and use anti-balaka fighters to put pressure on the new authorities.

The new administration’s first governance test will be security in Bangui, including protecting the tens of thousands of displaced in formal and informal camps. Since Djotodia’s dismissal, the Bangui security problem has been suspended but not solved. The risk of fighting between Seleka combatants and the anti-balaka militia remains high. The Seleka are gathered into four military camps in the city, where they are under guard, but what will be done with these fighters remains unclear. An effective disarmament, demobilization and reintegration program – one that avoids such past mistakes as simply bringing ex-fighters into new police and military units — needs to be a high priority for international peacekeeping, whoever is in the lead. Anti-balaka militia representatives have stated that the militias will not disarm as long as the international forces (the AU-led mission, known as MISCA, and France’s Sangaris mission) have not disarmed the Seleka fighters. The second security problem in Bangui concerns the anti-Muslim popular sentiment that is causing violence and population displacements. Solving these two security problems will require clear and strong cooperation between the new transitional authority and the international forces.

What are the respective strengths of the Seleka and anti-balaka forces?

The main body of Seleka fighters is presently cantoned in Bangui under international supervision, its fate as yet undetermined. It is impossible to know how strong Seleka-like forces are outside Bangui.

The anti-balaka fighters come from rural areas, carry traditional weapons and home-made guns, and wear grigri (magical charms) to make themselves invisible and bullet- and rocket-proof. Most are illiterate teenagers whose families have been killed and villages burned by the Seleka fighters. They basically lost everything and came to Bangui for revenge. They want the Seleka to be disarmed and leave Bangui and the neighboring provinces. They call them “Arabs” and consider them as foreigners. Every day in Bangui one hears about Muslims being killed in the city and in the provinces. Numerous demonstrations in the city end with hunting Muslims; two were lynched this Sunday morning, 19 January, in the city center.

This is a confrontation between two very different components of the CAR population. The Muslim people of the far north have now ventured to the territories of the people of the west and south and have revived memories of enslavement by Muslim traders. This is a significant cultural trauma. The ten anti-balaka groups are organised by region but most of them come from the west and south of the country and the Gbaya people (Bozizé’s tribe) are the majority.

Politically, the anti-balaka groups have recently split into two movements: the Front de résistance (majority) and the Combattants pour la libération du peuple centrafricain (minority, pro-Bozizé). The split came after the resignation of Djotodia: while the majority wanted to negotiate with the AU, UN and France, the Bozizé people want to carry on fighting.

Out of ten anti-balaka groups, three decided to form the Combattants pour la libération du peuple centrafricain, run by a former MP in the Bozizé camp in connection with the movement created in France by Bozizé (Front pour le retour à l’ordre constitutionnel en Centrafrique, or FROCA). The fighters belong to the Gbaya people from Bossangoa, the fiefdom of Bozizé. The Combattants pour la libération du peuple centrafricain are better equipped than the other anti-balaka and are led by former military personnel related to Bozizé. There is no doubt that Bozizé wants to use the anti-balaka to come back to power. In the meantime, he will use them to put pressure on the new transitional authorities and make sure his movement is represented in the new government.

None of these problems will go away just because a new government is in place. Only after restoring Bangui’s security fully will the new government be able to focus on security in the provinces – including cooperation with international peacekeepers protecting the major IDP encampments in key cities — and look to the political and development roadmap made by the previous government. This roadmap was of course not implemented at all; it highlights the reconstruction of key state functions as a priority. If the new transitional authority kick-starts this reconstruction with the support of international actors, it will end the perception of a power vacuum in CAR. Otherwise, the third transition risks quickly being considered another failure.