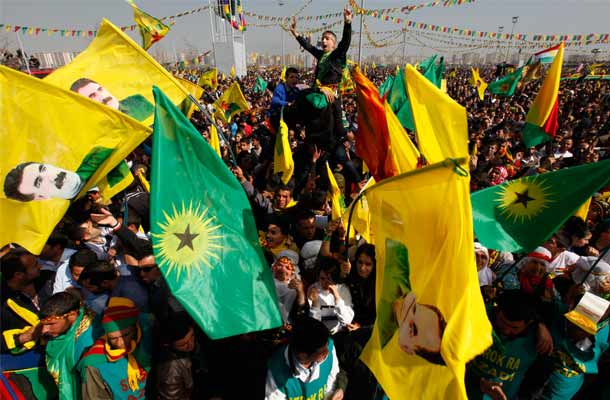 As a new peace process is under way between the Turkish state and the armed Kurdish insurgency, the jailed leader of the Kurdistan Workers Party (PKK), Abdullah Öcalan, sent a much-anticipated message to Turkey’s Kurds. The message, signalling the start of a new, promising phase in the Kurdish issue, was read by Kurdish deputies to a crowd of hundreds of thousands during the 21 March Nowruz celebrations in Turkey’s predominantly Kurdish Diyarbakır province. We spoke with our Turkey/Cyprus Analyst, Didem Akyel Collinsworth, to learn more about the implications of Öcalan’s message.

Q: What did Öcalan say and what does it mean for the peace talks?

Collinsworth: Öcalan called for the most important next step in the peace process, a ceasefire, saying it is time for “weapons to be silenced and for politics and ideas to speak”. He also called for a withdrawal of insurgent units outside Turkish borders, most likely to northern Iraq. He also dismissed past Kurdish demands for a separate Kurdish nation-state, making references to Kurds and Turks fighting together during Turkey’s war of independence. Nonetheless, he assured Kurds that their decades-long struggle was not in vain; through it, he said, they regained their identity. The armed insurgency served its purpose, but now it’s time to move on from it. His message also called for peace and unity of Turks and Kurds inside a new Turkey that will provide equality for all its people and cultures.

Collinsworth: Yes, we think the leadership of the Kurdish movement, and the majority of Kurds, still respond to Öcalan. The PKK will likely withdraw as he has asked it to. It has already released eight Turkish hostages as he requested.

Q: Does this mean the PKK is disarming? Is the Kurdish insurgency in Turkey over?

Collinsworth: No. The call was for withdrawal of PKK militants to outside Turkey, not for their disarmament. That could come at a later stage, if the reconciliation process continues successfully on both sides.

Q: How should the Turkish government respond?

Collinsworth: Prime Minister Erdoǧan has said that the government welcomes Öcalan’s offer, but that Ankara needs to see some implementation. The prime minister must signal much more clearly that he supports this process and work harder to rally Turkish public opinion behind a peace settlement. This will require real political courage. Many Turks will be frightened by images they are unaccustomed to seeing, such as the ones from Diyarbakır’s Nowruz celebrations with posters of Öcalan and PKK flags. Turkey’s leaders must explain that a successful peace process will have huge benefits for both Turks and Kurds – and that the war must end for Turkey to be safe from rising dangers in the region.

To strengthen Turkey’s democracy and show good faith in addressing the legitimate demands of its Kurdish citizens, the government should move firmly forward with real reforms that will allow full mother-language rights in education and public life; remove all ethnic discrimination from the constitution; change anti-terror laws to decriminalise non-violent dissent and enable the release of thousands of jailed Kurdish activists; and increase political representation in the country by lowering the 10 per cent threshold to enter parliament to at most 5 per cent so that the legal Kurdish party can win seats normally.

Q: The insurgency has been going on for 30 years.  What brought about this opportunity now?

Collinsworth: There have been periods of ceasefires and peace negotiations in the past decades, the most recent being the secret 2005-2011 “Oslo” talks between the PKK and the Turkish state. These collapsed in June 2011, giving rise to a new wave of violence with the worst yearly casualty figures since 1999. (Our informal minimum count was over 900 dead in the June 2011-December 2012 upsurge.) But the current negotiations seem more likely to succeed. The right people are in the room, with two principals – Öcalan and Prime Minister Erdoǧan — who can deliver a deal. The Kurdish movement is open to a settlement, and Öcalan seems, by his actions, to genuinely wish to strike a deal now. Perhaps he indeed has changed during his 13 years in prison, as Turkish officials suggest. The time is also good because there is more than a year until the next elections; the opposition Republican People’s Party is at least theoretically in favour of peace negotiations; and liberal opinion is strongly supportive. Finally, regional circumstances, particularly regarding Kurdish populations in Iraq and Syria, remind Turkey that the most important step it can take to limit its vulnerability to developments in these countries is to solve its Kurdish issue at home.