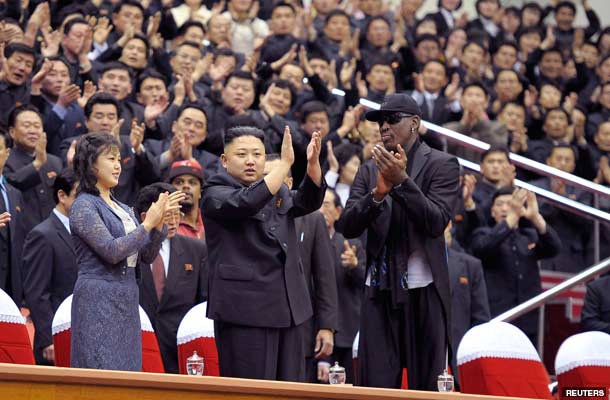 The last couple of years have been tough for North Korea watchers seeking new policy prescriptions for dealing with Pyongyang. The Six-Party Talks appear dead and Pyongyang has no consistent and formal diplomatic processes with either Seoul or Washington. Back channel efforts have failed. President Obama fulfilled his promise to reach out to adversaries by sending a secret delegation to Pyongyang twice in 2012, but this effort was rebuffed. The Lee Myung-bak administration also held secret meetings with DPRK officials in October 2009 and June 2011 to seek an inter-Korean summit, but without success.

More recently, former New Mexico Governor Bill Richardson and Google Executive Chairman Eric Schmidt led a delegation to Pyongyang in January 2013, but the group was widely criticised for visiting in the wake of the DPRK’s Ŭnha-3 launch the previous month. DPRK media described the delegation as having paid respect to former leaders Kim Il-sŏng and Kim Jŏng-il as great men, and as having recognised the DPRK as a great power in science and technology.

And now basketball genius (I’m not joking) Dennis Rodman, former National Basketball Association (NBA) champion and winner of seven consecutive NBA rebounding titles, has returned from a well-publicised trip to Pyongyang. Rodman was part of a group that included three Harlem Globetrotter players and Vice Media . This group, especially Rodman, is facing severe criticism. Rodman has been denounced for having called Kim Jŏng-ŭn a “friend for life” and an “awesome guy.” Professor Robert Kelly at Pusan National University sums up the view that high profile foreign visitors do a disservice by providing domestic propaganda value that lends credibility to the regime. While I tend to agree with Kelly, I think the Rodman visit is different and opens a window of opportunity to bring change to North Korea.

For there to be change in North Korean thinking, North Koreans first must question the country’s governance, organising principles and sŏn’gun ideology. One way is to encourage information inflows into the country, but radio and television tuners are fixed so they can only receive state broadcasts, and citizens do not have access to the internet or other means of communicating with the outside world. With limited opportunities to expose North Koreans to information that contradicts the state’s narrative and official sŏn’gun ideology, the U.S. government and others should not dismiss outright Dennis Rodman’s suggestion of “basketball diplomacy.” The Rodman visit was very important to the leadership. Kim Jŏng-ŭn snubbed former U.S. presidents and other heads of state, as well as a former high-level U.S. government official and the executive chairman of Google, but Kim turned out for Rodman and appeared giddy as they sat next to each other and watched the game.

The visit, access and North Korean media coverage reflect the importance of sports to the Kim Jŏng-ŭn regime. On 4 November 2012, a Sunday, an “enlarged” Politburo meeting was convened in Pyongyang to establish the State Physical Culture and Sports Guidance Commission. Several high-level officials from the party, military and the cabinet were present and the meeting received extensive media coverage. According to KCNA, the Politburo decided:

To put the DPRK on the level of a sports power is an important work to boost the national capabilities in every way, demonstrate the indomitable spirit and dignity of   Sŏn’gun Korea to the whole world and make all service personnel and people push ahead with the building of a thriving socialist nation full of great national pride and self-esteem as the developing revolution requires with a historic turn being effected in accomplishing the revolutionary cause of chuch’e.

The committee is chaired by Chang Sŏng-t’aek, Kim Jŏng-ŭn’s uncle, and aims “to control the overall sports work of the country in a unified manner.” KCNA reported that Kim Il-sŏng “wisely led the work of putting sports on a mass basis, developing sports technique and providing material conditions for it …thereby laying a solid foundation for the development of chuch’e-based physical culture and sports.”

Kim Jŏng-il is also credited with having made a great contribution by “putting culture and sports on a mass basis…as required by the era of sŏn’gun.” As for the party, KCNA reported:

The Workers’ Party of Korea unrolled a far-reaching plan to turn the DPRK, socialist political and military power, into an economic power and sports power, indicated the concrete direction and ways of carrying out the plan, and saw to it that wise measures were taken to bring about a radical change in the physical culture and sports of the country by making the sports wind rage across the country.

Given the state’s sports agenda, it is even easier to criticise the Rodman trip. The Kim regime sees sports as an instrument to increase social control and help achieve a totalitarian unity that is anathema to those who prefer an open and pluralistic society. The North Korean state is unmatched in the realm of social control. There is no civil society. There are extensive, redundant and overlapping institutions for monitoring and surveillance including the neighborhood watch units or inminban (人民班), the Ministry of State Security, the Ministry of People’s Security, the Korean People’s Army General Political Bureau, and the Defence Security Command. No activities outside the purview of party and state control are tolerated.

The State Physical Culture and Sports Guidance Commission was established as yet another institution to monitor and control the lives of every North Korean and to bring glory to the Kim family regime. To contribute to this agenda is deplorable, and most analysts have interpreted Rodman’s visit in this context. But perhaps the Rodman visit offers an opportunity to deliver a Trojan horse of subversion.

North Korea’s leaders want their system to survive, and any changes they make are intended to strengthen the system, not to reform it. They have learned from Gorbachev’s “mistakes” of seeking political reforms and restructuring to improve the Soviet system. The North Korean leadership apparently views sports exchanges as furthering its own agenda.

However, “basketball diplomacy” could have unintended consequences for the regime, just as Gorbachev’s perestroika did for the USSR and the lifting of travel restrictions did for East Germany. Personal exchanges are probably the best way to expose North Koreans to different types of governance and social organisation, which is the first step in the thought process that results in questioning the regime.

First, the Rodman visit is subversive because the image of Kim Jŏng-ŭn embracing Rodman can be perceived as the leadership tolerating or accepting someone who is different. South Korea’s Daily NK reported that North Koreans in the provinces were stunned to see Kim embracing an American with numerous tattoos and body piercings and likened it to Kim embracing a “goblin or gangster.”

Why not systematize all this with a ‘Basketball Development Foundation’? A few former NBA players could serve on the board, to give it allure. I have no doubt its funding would not prove to be a problem, especially if the institution received an explicit or tacit endorsement from President Obama, which the North Korean leadership also seeks for its commitment to “basketball diplomacy.”

In a short amount of time, this foundation could host basketball development clinics in Pyongyang, but only on the condition that North Korean teams participate in clinics and tournaments outside North Korea as well, and at no cost to North Korea. You want basketball diplomacy? Sure, we’ll fund an all-expenses-paid trip for three weeks for North Korean basketball teams to attend a camp and tournament on the beach at Waikiki. That would give the North Koreans a chance to bow in front of the Duke Kahanamoku statue, and with plenty of kimch’i in Honolulu, they’d feel right at home. Tournaments in Sydney, Vancouver, Hong Kong, Manila, etc., could be held. I would even suggest a game at the Joint Security Area in Panmunjŏm between a KPA team and other national military teams, along with a game featuring mixed teams and players from the North Korean national team and NBA players like LeBron James and Kobe Bryant. If Kim Jŏng-ŭn wants basketball diplomacy, I say, “Bring it!”

Once Kim Jŏng-ŭn makes a strategic decision to return to real diplomacy, abandon sŏn’gun, and embark on denuclearisation, President Obama can call Kim to discuss the details of the annual Obama-Kim Basketball Tournament for Peace. Just as ping-pong diplomacy helped thaw relations between the U.S and China in the 1970s, basketball diplomacy, with appropriate implementation, could help thaw relations between the U.S and North Korea.