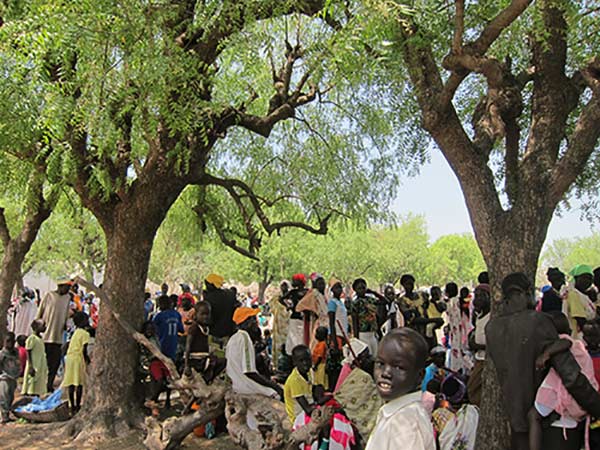 Crisis Group’s Africa Program staff assembled this Q and A to provide an update on events in South Sudan. For background and further discussion see our most recent report, South Sudan: A Civil War by Any Other Name, and the accompanying videos featuring Crisis Group analysts Casie Copeland and Jérôme Tubiana.

What are the latest developments in the South Sudan conflict?

At the conflict’s outbreak in mid-December 2013, President Salva Kiir and former Vice President Riek Machar immediately mobilised their respective Dinka and Nuer constituencies, thus ensuring the war’s political and ethnic dimensions were deeply intertwined from the beginning. The war, between Kiir’s Sudan People’s Liberation Movement/Army (SPLM/A) and Machar’s Sudan People’s Liberation Movement/Army in Opposition (SPLM/A-IO) but including other armed groups, has killed tens of thousands, displaced over a million, led to ethnically targeted violence against civilians and brought the spectre of famine back to South Sudan.

Once conflict was under way, the regional peace and security body IGAD (Inter-Governmental Authority on Development) quickly launched peace talks in Addis Ababa, Ethiopia. A cessation of hostilities agreement was signed in January and the parties made a formal recommitment to its humanitarian principles in May. None of these have been observed. Following a visit by U.S. Secretary of State John Kerry and UN Secretary General Ban Ki-moon to South Sudan, Kiir and Machar signed an agreement in Addis Ababa on 9 May committing to cessation of hostilities and agreeing to a transitional government and participatory peace process. Fighting continued even during their meeting and the cessation of hostilities never began.

Why don’t the parties want peace?

The failure of the government and opposition to commit to peace talks and cease hostilities has confounded IGAD, China, the “Troika” (U.S., UK, and Norway) and frustrated the efforts of many South Sudanese. But there are clear and mutually reinforcing military and political reasons for the parties to continue fighting. Both sides believe they can capture or retake territory, including key towns and oil installations, and thereby strengthen their negotiating positions prior to substantive talks. The oil fields, and the revenue they generate (accounting for 98 per cent of the government’s budget), are key strategic objectives and have seen significant conflict.

What is the role of the “SPLM Detainees”?

Eleven political leaders were detained by the government at the start of hostilities. Seven of them were released in January. Four were put on trial for treason, but the charges were dropped in April, with the government saying it had released the men in the interest of peace. All eleven are now in Addis Ababa and they form a political bloc known as the “SPLM Detainees”.

Both the government and opposition have sought to deny them (and civil society representatives) a seat at the negotiating table, arguing that peace talks should be between the two principal armed groups. But beneath this stance lies the fear that the SPLM Detainees will be seen by the international community as a more neutral and peaceful “third party” capable of ruling South Sudan for a transitional period at the expense of both Kiir and Machar as well as their supporters. This fear was seemingly confirmed by the agreement presented to Kiir and Machar on 9 May in Addis Ababa, which provided for the inclusion of the SPLM Detainees in negotiations about a transitional government.

Are we seeing an escalation in atrocities?

In the days following the outbreak of hostilities, government forces in Juba systematically killed hundreds, possibly more than one thousand, Nuer civilians. Quickly thereafter, opposition forces massacred Dinka civilians in Bor town and county, again killing hundreds. Throughout the war, violence against civilians has occurred in hospitals and places of worship as well as inside and in front of UN Mission in South Sudan (UNMISS) bases. In addition to well-publicised killings, such as those in Bor and Bentiu – the latter also involving the use of radio programs to incite ethnically targeted sexual violence – there have been many other massacres by the government, government-aligned forces and the opposition in multiple locations, such as Baliet and Leer. Atrocities allegedly committed by the Sudanese rebel group Justice and Equality Movement (JEM), fighting alongside the government, appear to have motivated SPLA-IO fighters to murder and rape Sudanese, in particular Darfurian, civilians in Bentiu. The military support given to government forces by Shilluk militia under the command of Johnson Olony (recently amnestied by President Kiir) similarly led to opposition targeting of Shilluk civilians in Upper Nile state. (Shilluk are the third largest ethnic group in South Sudan after the Dinka and Nuer.) The conflict has been characterised by significant, ethnically targeted violence since the outset and that has continued, over a wide area, for nearly six months.

What is the significance of the 17 April attack on the UN compound in Bor?

The attack on the UN compound in Bor marks an increasing challenge to UN efforts to protect civilians. The highly organised Dinka attackers – some in government uniforms – breached the perimeter fence and killed more than 50 Nuer civilians before being repelled by UNMISS troops. There have been no arrests, even though some of the culprits are widely known; this signals to both government and opposition forces that attacks on the UN, and on civilians seeking its protection, will not be punished.

What actions are being considered by the international community and will they work?

On 6 May, the U.S. announced sanctions against Marial Chanuong Yol Mangok, the Presidential Guard Unit’s commander, for his role in the violence in Juba at the conflict’s outset, and Peter Gadet, a senior opposition commander, for his role in attacks on civilians in Upper Nile and Unity states and the destruction of part of an oil installation and for violating the cessation of hostilities. The U.S. is also seeking a UN Security Council resolution for multilateral sanctions against members of the government and SPLA-IO and to gain the support of regional states to implement the measures. (Senior South Sudanese officials and commanders in both the government and opposition have substantial assets in neighbouring countries.) There are also calls for an arms embargo both to limit war-fighting capacities and to draw critical attention to regional arms flows. An oil embargo and a moratorium on new oil and mineral concessions are also under discussion, though there are concerns that these measures would disproportionally impact the government.

Unfortunately, individual sanctions (asset freezes and prohibitions on financial transactions with the sanctioned party) and arms embargos have not always proved to be effective peacemaking tools, particularly in the Sudans. The UN’s Darfur sanctions regime included an arms embargo and individual sanctions, but the embargo has been consistently violated – by Sudan, South Sudan, Uganda and the UN itself – while individual sanctions, only taken against four individuals, have proved largely irrelevant and may have impeded the peace process.

As has happened in Darfur, sanctions can prevent the sanctioned party from being able to participate in peace talks. Sanctions and arms embargos tend to be blunt instruments. To be effective in South Sudan they will need broad support from the international community. They will need to be carefully calibrated, enforced and, most important, subservient to a political strategy aimed at moving forward a comprehensive peace process. The threat of sanctions, especially the threat to seize assets of South Sudanese leaders in neighbouring countries, is probably as valuable a tool as the sanctions themselves in advancing the IGAD negotiations and their prospect should be fully utilised before the tool itself is put into force.

What could a regional force do in South Sudan?

Much hope is now being placed on the deployment of a regional force, reported to be comprised of approximately 2,500 troops. The force’s mandate remains a critical point of discussion; options range from a narrow role in protecting the Monitoring and Verification Mission for the cessation of hostilities agreement to a broader mission of protecting civilians and/or UN bases and even actually enforcing the cessation of hostilities. The regional force looks likely to operate under UNMISS to allow funding through the UN. While a regional force would presumably deploy with greater air assets – and fewer restrictions by troop contributors – than is currently the case with UNMISS troops, its relatively small size will limit its ability to carry out its ambitious mission. South Sudan’s civil war is being fought on the world’s largest swamp, and even the 7,500 UN troops already in country are largely unable to provide protection beyond their own bases (and face acute challenges even there, as the attacks on Bor and Akobo show).

The regional force would include IGAD member states – Ethiopia and Kenya – as well as non-members such as Rwanda and Burundi. Uganda has already deployed forces in support of the government. Indeed, each of the potential troop contributors – not just Uganda – has specific national interests in South Sudan, interests that may not be reconcilable among the contributors and may conflict with the political track in Addis. The existing Kenyan and Rwandan troop deployments to UNMISS and Ethiopia’s role as the sole troop contributor to the UN Interim Security Force for Abyei (UNISFA), the Sudan/South Sudan border-monitoring mission, also bear on the deployment of a regional force. UNMISS’s mandated troop strength is 12,500 but only 7,500 are currently in country. Vital to the success of both UNMISS and a regional force will be to balance troop contributions between these two missions; ensure that troops committed to the regional force are not used to offset other deployments to the UN mission; to insist that any deployments must be in support of UN mandates not national interest narrowly defined; and to establish mandates consistent with what the forces can actually achieve.

Above all, the regional force should work to enable peace talks, help implement political agreements and support a transition, rather than simply to contain the civil war. The regional force’s deployment should be closely coordinated with a new mandate for UNMISS which clearly delineates its role as an impartial actor and prioritises protection of civilians. An enforced cessation of hostilities that is not paired with equally serious work towards national political dialogue would be a costly long-term prospect for the international community and bring South Sudan no closer to a stable and representative governance arrangement.

What can talks actually deliver?

The core priority of the international community is delivering a peace process that leads to national political dialogue. Sanctions and embargos, or threats thereof, as well as the further deployment of forces, must be designed to stop fighting, prevent further atrocities and pressure parties into substantive peace talks. While talks must begin with the government and SPLM/A-IO, they will have to expand to include internal SPLM reform, the multiplicity of armed groups, and community-level dialogue, including women’s representatives and others typically marginalised from such discussions. Inclusive peace talks are a practical as much as a principled imperative. Neither Kiir nor Machar controls all those fighting on the government or opposition sides and including only them is unlikely to end the violence. Other leaders, including representatives of communities across the country, need to be brought in.

Several tracks are needed to begin a process of national political dialogue and to determine the structure of any transitional arrangements, including justice and reconciliation. This should lead to a participatory constitution-drafting process and pave the way for elections after a suitable period. The SPLM’s failure to undertake these participatory measures was a major contributor to the descent into civil war. The Comprehensive Peace Agreement of 2005 between Sudan and the SPLM was an elite political bargain that has demonstrably failed. International action must support mediation directed towards building a truly representative system of governance capable of ensuring a sustainable peace.

Connect with Crisis Group and stay up to date!