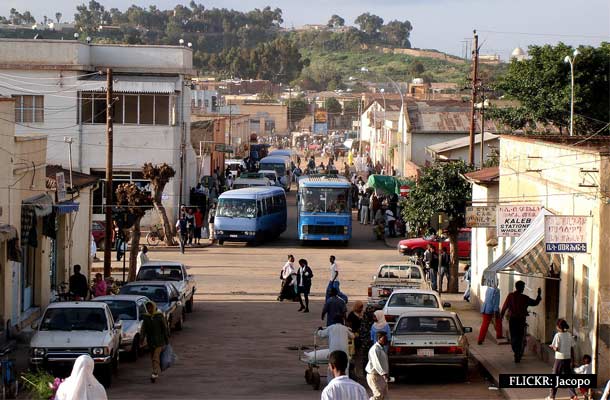 On Monday 21 January, a number of unofficial sources reported that 100 or so soldiers had invaded Eritrea’s Ministry of Information and taken over state-owned Eri-TV. During their occupation, the soldiers began broadcasting a statement demanding the implementation of the constitution — never enacted by Parliament — and the release of thousands of political prisoners, including a number of high-profile journalists, and former ministers, senior military officers and officials known as the “G15”, before the station went off air. The rest of the armed forces were described as “quiet”, as was the city, and no shots were fired either in the taking or surrender of the Ministry.

It is hard to tell what exactly happened, or why. News from Asmara is opaque at the best of times, and this apparent military-led protest — or “small incident” as the Eritrean government is terming it — is the latest in a number of informally reported developments, only a few substantiated, suggesting cracks in the unusually regimented state. Since there are no accredited independent journalists in Eritrea, the only alternative to government media is diaspora-driven opposition news websites. These can be illuminating, because Eritrea is a curiously intimate place, with members of the same family occupying top government positions while their close relatives are vocal anti-government activists abroad.

What has emerged was that 2012 was a remarkably newsworthy year for the usually unnoticed county. It began with Ethiopia and Eritrea trading accusations after foreign tourists were attacked and five killed by Ethiopian rebel groups in the Afar region, which is close to the border between the two states. Addis claimed the rebels were under Eritrean direction, justifying Ethiopian reprisals in March against rebel camps across the border. Further incursions were reported in late May — just after Eritrean Independence day — with Ethiopian troops apparently occupying new positions inside Asmara’s territory. Eritrean forces, surprisingly and perhaps ominously for their government, put up little resistance.

From late March until late April, the normally omnipresent Eritrean President Isaias Afkwerki was absent from public life, prompting speculation he was sick, even dead. When he reappeared, little explanation was given, and he looked in good health at Independence Day celebrations. Coincidentally a few months after Isaias resurfaced, Ethiopian Prime Minister Meles Zenawi disappeared from public life; his death was announced on 21 August.

Meles’s death was studiously underplayed by the Eritrean government, though it was a topic of anxious speculation among the population at large, who were concerned about a change in Ethiopian policy — Meles was popularly perceived as less hawkish towards Eritrea.  At that time information emerged that the Eritrean government was arming civilians — many of whom have basic military training — apparently unconcerned that weapons might be later turned against the government.

By the latter half of 2012, more rumours were circulating of discord in the government about the state and direction of the country and the ups and downs of high-profile ministers and military commanders, variously perceived as pro-reform or rivals to the president. Indicative of declining morale, in early October, two air force pilots absconded with the presidential plane toSaudi Arabia, claimed asylum, and made a statement critical of their head of state. But this was just one, albeit dramatic example, of the tens of thousands of other Eritreans who fled during the year. The last unconfirmed rumour in November was that the stalwart Minister of Information, Ali Abdu, had also disappeared.

What does the latest incident signify?

It ended peacefully, at least so it seemed. The protesting soldiers were transported to the outskirts of Asmara, their fate so far unknown. Web-based reports claim that the government is talking to the protest leader, Colonel Saleh Osman, a veteran of the liberation war and respected serving officer reputed to have refused orders to withdraw from the city of Assab during the 1998-2000 border war with Ethiopia- a last stand that, many Eritreans believe, pushed Ethiopia to agree to a peace deal.

Some sources claim that with the TV protest, Saleh was simply demanding political reform. But others suggest that this is a well-orchestrated warning by senior military figures who stand to lose from political and economic reform that the ruling People’s Front for Democracy and Justice (PFDJ) has been mooting for the past year. Either way, partisan analysis dominates.

While not a coup, or even a mutiny, this highly unusual behaviour by Eritrea’s troops, is still significant. The last major protest by “veteran” fighters was in 1993, and this incident comes in the 20th anniversary year of Eritrea’s formal independence. Of course, the Eritrean calendar starts in September, so we are already well into what seems to be a momentous though uncertain year for Eritrea.