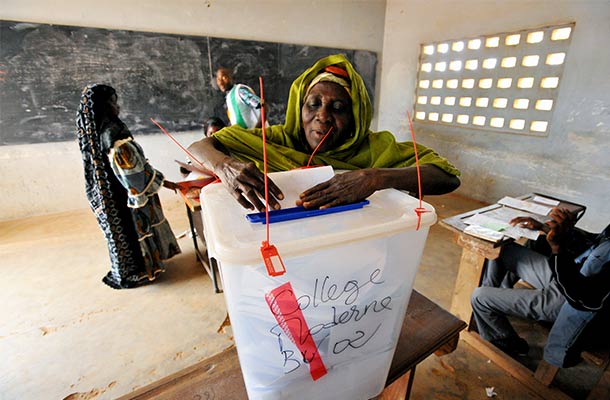 A woman casts her ballot in legislative elections at a polling station in Bondoukou, Côte d’Ivoire. PHOTO: UN/Hien Macline

Please note, this blog post is also available in French

Preparing for the 2015 Presidential Election in Côte d’Ivoire

Côte d’Ivoire’s political parties have begun campaigning without having settled how to run the election in the first place. That is a mistake. There needs to be a consensus on the election mechanics, and now is the ideal time to develop one. The conditions for a constructive dialogue between the ruling party and the opposition have never been better. The Ivorian political class should seize this opportunity to find agreement on at least three issues in order to guarantee the success of the next election: revising electoral lists; setting up a new electoral commission; and giving election losers a greater stake in the system. The international community should enable this dialogue by dispatching a facilitator to Abidjan to stimulate and arbitrate a meeting of minds among the ruling party and the opposition.

Since the end of the post-electoral crisis in 2011, the two main rival parties, the Rally of Republicans (RDR) and the opposition Ivorian Popular Front (FPI), have officially met only once face to face, in January. This meeting did not lead to any concrete decisions but it did show that dialogue was possible. As one diplomat noted, “Unlike in some other African countries, we are in a situation where it is conceivable to put political leaders face to face”.

The liberation in August of fourteen members of the FPI – they had been detained without trial since 2011 – ushered in a truce. This fortunate period is likely to grow more productive politically once the question is resolved of whether former FPI head (and former president) Laurent Gbagbo will face International Criminal Court prosecution. The FPI, hoping for a Gbagbo comeback, has frozen every important decision, including whether to engage in serious negotiations with the RDR. But the ICC’s judges gave prosecutors until 15November to finalise their accusation. If Gbagbo is kept in detention, the FPI will have to start making key decisions for itself.

Last January’s meeting between the ruling party and the opposition showed the importance of an external facilitator: it took place thanks to the intervention of Senegal’s president, Macky Sall. Since the signing of the Ouagadougou political agreement in March 2007, the most successful phases of dialogue have occurred under the aegis of a mediator. Disputes over the 2010 presidential election were settled within a permanent consultative framework arbitrated by Burkina Faso’s president, Blaise Compaoré. More recently, efforts made by representatives of the UN Secretary-General paved the way for informal meetings and reinforced trust.

The appointment of an external facilitator accepted by the whole political scene would help stimulate dialogue and arbitrate meetings that otherwise tend to get very personal very fast. A facilitator could also help Ivorians focus their efforts on creating a pragmatic agenda with one simple objective: inclusive, transparent and peaceful presidential elections. This would be altogether new for Côte d’Ivoire.

The main risk today is that FPI leaders boycott the next presidential election if they are not involved in its preparation. Such a boycott would mean a low level of participation that will harm the legacy and legitimacy of the current president, Alassane Ouattara, and the whole reconciliation process. To avoid this, the opposition and ruling party have to find common ground on several issues. First is the problem of the electoral lists: the Ivorian register, counting 5.7 million potential voters, is outdated. This list does not include hundreds of thousands of youth, nor the thousands of voters left unregistered during identification operations carried out before the 2010 elections. Furthermore, if thousands of exiled pro-Gbabgo supporters decide not to come back, their participation in the vote has to be discussed.

Second, Côte d’Ivoire also inherited an outdated electoral commission that doesn’t reflect political reality and is dominated by the ruling party. This commission must be reformed to reflect a balance between the different parties – or, alternatively to be nonpartisan, though that is probably unrealistic given the currently polarised politics.

The redefinition of a legal electoral framework would not only help ensure a peaceful presidential election in 2015, it will greatly improve the prospects for successful parliamentary elections scheduled for December 2016. The return to a balanced national assembly in which the opposition is represented is crucial to political normalisation. Updating the voters list and reforming the electoral commission are not just technical issues. Forging consensus between the parties on how both processes will happen, and bringing them all on board, are essential if elections are to move the country forward – which is why a facilitator is needed.

Finally, the Ivorian constitution, largely inspired by the French one, gives immense powers to the president. Unfortunately, the president does not then tend to leave much for his opponents. Constitutional reform should give more weight to the opposition in political life and party financing. Reform is unlikely ahead of the 2015 polls but remains vital to reducing the stakes of political competition – and the price of political defeat. Without those reforms, the loser will always be tempted to contest election results, including by resorting to violence, out of fear of being left with nothing.

Rinaldo Depagne is the West Africa Senior Analyst, based in Dakar, Senegal. He joined Crisis Group in November 2008 as a Senior Analyst for West Africa. He has previously worked as a journalist, specialising for the past fifteen years in Africa and, in particular, West Africa. He has worked for various French newspapers and international radio stations, including the BBC and Deutche Welle. Rinaldo speaks French and English.