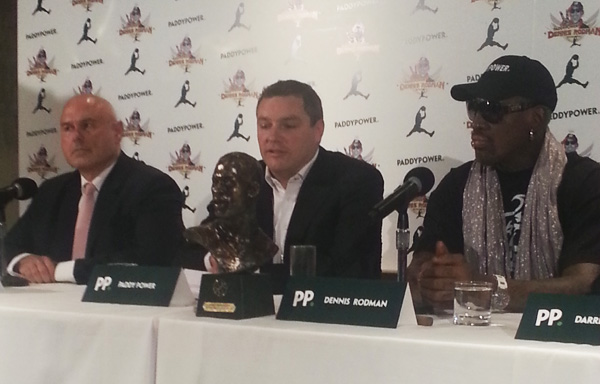 Has Dennis Rodman Opened the Door to Pyongyang?

North Korea poses a number of traditional and non-traditional security challenges. The international community is dissatisfied with Pyongyang, whether because of fears of spillover effects beyond North Korea’s borders, or by unease over human rights violations within them. North Korea’s policies on human rights, food security, economic security, military affairs, and the proliferation of missiles and weapons of mass destruction repeatedly and understandably bring harsh condemnation from outside.

North Korea’s transgressions are well documented, but policymakers struggle to find appropriate policy instruments to address them. Almost always, their suggestions and recommendations give little thought to North Korea’s internal dynamics, focusing instead on the international community and what we should do. This is appropriate since external actors only have direct control over their own actions; however, the inconvenient truth is that the North Korean leadership alone holds the keys to DPRK policies. Unless foreign powers oust the regime by force, policy change in North Korea is contingent upon the decisions of the DPRK leadership.

If the world is dissatisfied with DPRK government policies but is unwilling to use force, there are two other options: do nothing and ignore the DPRK; or try to influence the thinking of the DPRK leadership so that it reassesses and changes its policies. Economic sanctions and diplomatic pressure are aimed at this second objective. Sanctions are a pragmatic approach designed to raise the costs for the DPRK of sustaining its policies. Clearly, the DPRK pays a high price for its policy intransigence, but unfortunately, the DPRK has demonstrated extraordinary resilience and a determination to maintain its policy course.

The international community has little choice but to impose costs on the DPRK for its appalling human rights violations and WMD proliferation. Sanctions should only be relaxed or lifted in exchange for Pyongyang’s compliance with UN Security Council resolutions and international law. A robust deterrence and containment posture is prudent until the DPRK shifts its confrontational national security policy to a more cooperative one. These measures are necessary for so long as Pyongyang maintains its current policy positions, but sanctions and deterrence have proved to be unsuccessful as an instrument to effect policy change or to influence DPRK thinking in ways that accommodate the international community’s concerns.

There is an additional option. North Korea’s state ideology and policies are rife with contradictions and inefficiencies. These contradictions have been exposed around the world, but they can be exposed inside the DPRK only if the North Korean people are able to assess state policies and ideology from an alternative reference point. In order to establish an alternative reference point the people must be exposed to different ideas and information.

Civil society plays an important role in transmitting new ideas and novel information. Exposure to new ideas stimulates critical thinking that people can use to raise questions about social systems and governance. Private citizens do not carry the risk of delivering political prestige or some type of diplomatic recognition when they engage with the DPRK. Furthermore, people-to-people contacts can undermine state propaganda, which typically misrepresents foreigners as demons seeking to invade or destroy the state.

Dennis Rodman’s second visit to North Korea – an exercise in extraordinary flamboyance – has resulted in an agreement to hold a short-term basketball training camp in the DPRK for North Korean players and a game with former National Basketball Association (NBA) players from the U.S. This first match will be a pilot project with an option to hold a tournament with North Korean players in Europe. While only a small step, these games could become a mechanism for the introduction of new ideas and information that are so sorely needed in North Korea.

The alternative to civil society engagement is to isolate the DPRK completely and prevent socialisation processes that can accelerate critical thinking. Now that the Rodman visit has produced an arrangement for exchanges in sports and culture, more North Koreans will be exposed to new ideas and information. This should be welcomed and encouraged since it comes with very little risk and cost, but it creates a small window of opportunity for social exchange and, perhaps, some eventual policy change in North Korea.

Connect with Crisis Group and stay up to date!