Last month, iron anti-riot shutters boarded up the street-side windows of the Grande Bretagne hotel ballroom in Athens as fine-suited patriarchs of Greek and Cypriot industry gathered for the annual Athens Energy Forum, hoping that recent discoveries deep beneath the Mediterranean might power them out of austerity budgets and Eurozone bailouts.

But the idea of hydrocarbon salvation in the eastern Mediterranean is wishful thinking. The potential riches remain buried under decades of sterile politics: a lose-lose-lose failure to compromise between Greece, Cyprus and Turkey that will likely keep gas in the ground for much longer than is ever admitted in silver-tongued speeches at the Grande Bretagne.

The underlying reason is this: neither Turkey, nor Greece, nor Cyprus can securely say what belongs to whom. They have snookered themselves with maximalist claims to Exclusive Economic Zones in the Aegean and Mediterranean that cannot be resolved without major compromises. (According to the U.N. Law of the Sea, EEZs can extend up to 200 nautical miles from a country’s coast line; countries usually agree a median line if there is an overlap; islands may or may not allow EEZs to extend much further than a country’s mainland). If they try to drill without these compromises, they will have less reputable partners and higher costs; they will make un-economic development decisions; and they will risk igniting new conflicts.

This impasse is a legacy of old conflicts left unresolved because political elites have long chosen quick political gain over courageous steps towards compromise. The price of nationalist rhetoric over islands and maritime boundaries always seemed insignificant. But these individual actions have accumulated, and the resulting political blockage now gravely threatens core areas of these countries’ independence. Which, paradoxically, is the very reason the elites said they couldn’t compromise in the first place.

In Cyprus, an understandable but too absolute obsession with righting the wrongs of the Turkish invasion of 1974 led to its rejection of the UN’s Annan Plan to reunite the island in 2004. It also fostered a national blindness to the Cypriot elite’s survival tactics – loose bank regulation and risky international dalliances. Development and investment decisions were put off year after year because of unresolved angst about whether a conflict that left 30,000 Turkish troops dividing their capital and occupying the northern third of the island was really a frozen one.

In Cyprus, the real natural gas volumes in the new Aphrodite Field remain unknown. But even if it is 200 billion cubic meters, as claimed, profits could be 20-30 per cent less because of the frozen conflict – which, according to some bank reports, would mean no profits at all. That’s because of limited export options. An LNG plant will cost some $10 billion and face considerable market risks. A pipeline to Greece may cost $15-$20 billion. By contrast, studies have shown (see our report Aphrodite’s Gift: Can Cypriot Gas Power a New Dialogue?  and the Peace Research In Oslo report  The Cyprus Hydrocarbons Issue: Context, Positions and Future Scenarios) that the most profitable export route is by pipeline to Turkey – a growing market with easy onward access to Greece now and, most probably, Europe soon. But that pipeline cannot be built without a Cyprus settlement.

Failure to resolve Cyprus has forced Turkey, too, to pay a heavy long-term price in damage to its diplomatic image. It has lost EU aid in the past and now the freezing of half its negotiating chapters with the EU. Ankara did give brave support to the Annan Plan in 2004. But this was a late and brief exception to Ankara’s unwillingness to put behind it Turkish Cypriot suffering in the 1960s, and its failure to use its position of overwhelming power to really reach out to Greek Cypriots.

Turkey has other problems too. It is doing exploratory drilling in uncontested territorial Mediterranean waters (within 12 nautical miles of its coast), but beyond that Greek and Cypriot EEZ claims leave it with a very reduced uncontested area, despite the fact that Turkey’s big size gives it one of the longest coastlines in the eastern Mediterranean. 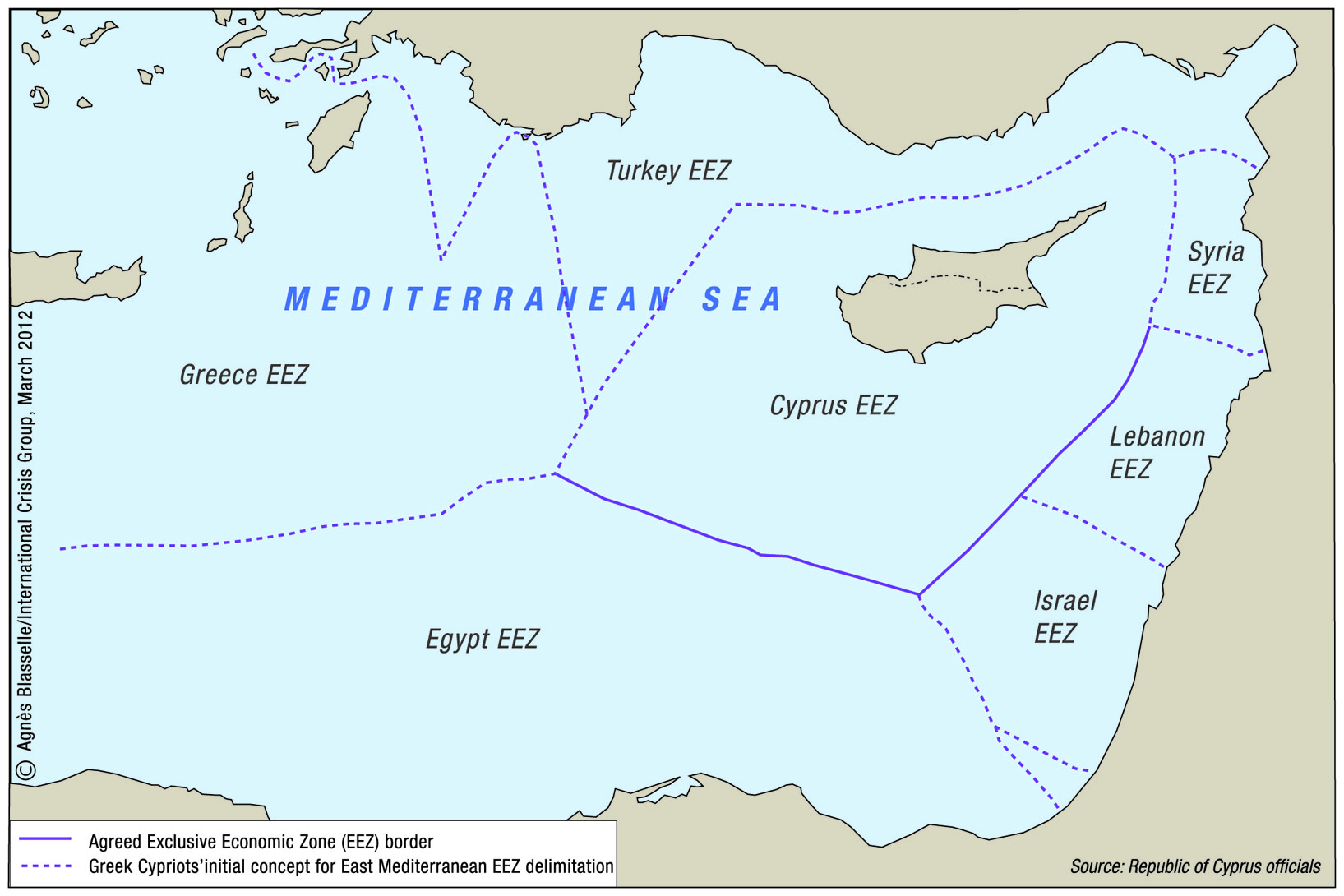 In Greece, politicians’ failure to solve the Aegean Sea nexus of maritime zone disputes has long forced Athens to spend a disproportionate five per cent of its budget on defence – the highest ratio in Europe. Prime Minister Antonis Samaras told  executives at the Athens Energy Forum that he is determined to drill. But his options are limited. Drilling due south of Crete would not conflict with Turkish claims (it might clash with Libyan ones, however). But anywhere east of Crete, and almost anywhere in the Aegean Sea, it  will confront Turkish claim. And any clash of claims means extra, and possibly prohibitive, costs and risks. 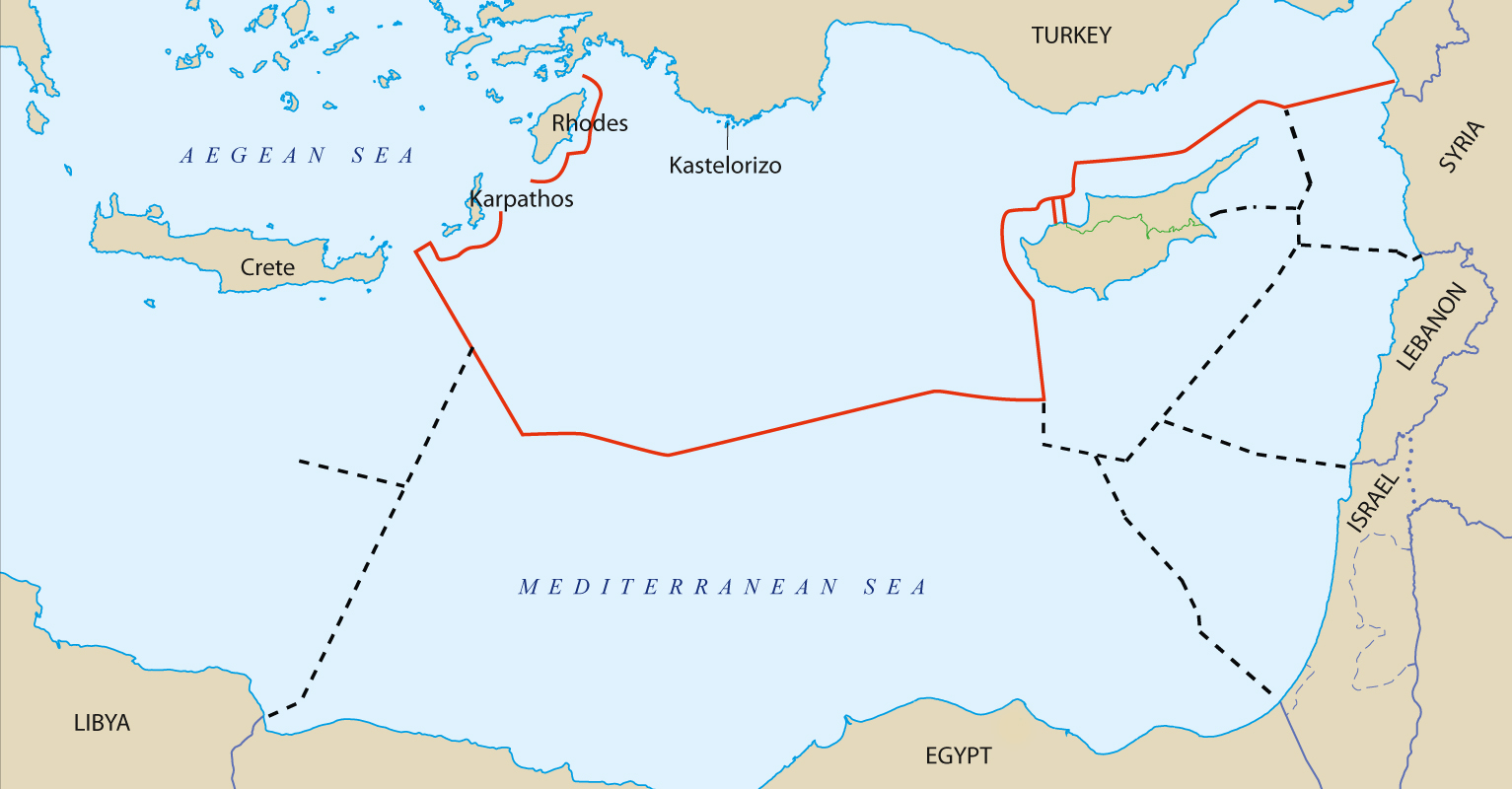 In the Aegean, Turkish officials know perfectly well that Greece’s claim is much stronger than its own (with 2,000 Greek islands dotting that sea). And Greek officials must know that Turkey’s claim in the Mediterranean is much stronger than theirs (since the Greek position is based on a speck of an archipelago 125 miles east of the nearest Greek territory). If the two sides went to the International Court of Justice, the normal arbitration venue, the court would probably balance Greek rights in the Aegean with Turkish rights in the Mediterranean. But Turkish officials say they will never go to court with Greece over this because it would leave unresolved the overlapping Cypriot claim in the Mediterranean. And this claim cannot be dealt with until – you’ve guessed it – the Cyprus problem is settled.

It doesn’t have to be like this. Greece and Turkey started a process of political and commercial normalisation in 1999 that brought out immense good will, new trade and positive energy. A normalisation on Cyprus that would somehow fit the Republic of Cyprus and the self-declared Turkish Republic of North Cyprus into the international system – whether it is reunification, a loose federation or a negotiated divorce – would probably do more good for the Greek Cypriot economy than either the gas or the bailout.

If Europe truly wants to help fellow EU members Greece and Cyprus in their hour of need – to put these damaged economies back on a healthier path, and to guide Turkey’s EU relationship onto a more normal track – its leaders should turn their attention once more to the mother of all obstacles to stability and prosperity on the southeastern edge of Europe:  settling the division of Cyprus. And to help that, since the EU, Turkey and Cyprus are always welded together like a triangle, European countries will have to reach out to Turkey: be proactive in making visa procedures more humane, push France to lift its block on four EU accession chapters, reciprocate the recent overtures by Turkish leaders, and publicly recognise the enormous advantages Europe has reaped as Turkey’s principal trade and investment partner.