In recent weeks, it seems to have been on the talking points of officials in South East Asia to note all the progress in implementing the Association of Southeast Asian Nations’ blueprints, codes of conduct, declarations, institutes, and mechanisms. While a seasonal flurry of statements came out of last month’s Phnom Penh summit, it is often hard to discern behind this jargon what progress is being made in promoting regional peace and security. Will all this “architecture” make ASEAN a “peace loving” grouping that is ready to reconcile its ten members’ many differences as well as those of its neighbours?

In trying to answer this question, two creations that came into being on 18 November at the 21st ASEAN Summit are worth looking at a little more closely. One was mostly ignored; the other caught in the global spotlight.

To some, the ASEAN Institute of Peace and Reconciliation (AIPR) is an “exciting development”, but on paper it appears to be an anodyne body and not yet anything more than an additional acronym in meeting communiqués. 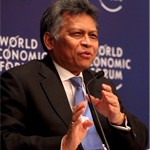 Some subtle points in two recent speeches by outgoing ASEAN Secretary-General Surin Pitsuwan and Indonesian Foreign Minister Marty Natalegawa are also worth noting. Surin gave a final briefing in Jakarta on 26 November as his five-year term comes to end. Marty gave his annual address to the Jakarta Foreign Correspondents Club on 10 December. In January, the wordy former politician and Thai foreign minister hands over as Secretary-General to the far less quoted Le Luong Minh, a career diplomat from Vietnam. As the new secretary-general settles in ASEAN watchers are not expecting as much public reflection in the coming year, especially with taciturn Brunei taking over the rotating chairmanship.

Surin said ASEAN is now the focus of much global attention, and it is feeling the pressure, especially over the issue of the South China Sea. It is ASEAN’s insistence on decision by consensus and the competing interest of its own members that stops it from developing a common position vis-a-vis China on this issue and allows Beijing to divide, if not, control the grouping. This is something Crisis Group highlighted in our July report Stirring Up the South China Sea (II): Regional Responses. After the consensus-driven organisation could not even issue a joint communiqué in July following a foreign ministers’ meeting in Phnom Penh, it suffered something of a crisis of confidence. The debacle laid bare the deep fault lines that have long run through its diverse membership that spans the political spectrum from democracy to sultanate.

The increased attention caused by rising regional conflict is proving to be a strain on the institution and the membership. Surin believes its leaders are beginning to recognise that without a stronger organisation, this additional pressure will be difficult to handle. Its decision-making needs to be faster with communications between the secretariat and the capitals more effective and decisive. In a bold claim for such a deliberately constrained institution, he said the ASEAN Secretariat needs to be able to make its own decisions rather than refer everything back to the capitals. It was an ambitious vision to lay out on the way out the door as the association seems a long way from giving its secretariat any independence.

No longer the neglected backwater, South East Asia is back on the map of world politics, as the U.S. rebalancing recognised. As the great powers converge to assert their interests at the hundreds of meetings the association hosts each year, Surin asserted that ASEAN will needed to strengthen itself, and AIPR is one body that could play a role here as an institution that would mediate between countries within and outside the region.

It seems like a lot to ask from an institution that does not yet exist.

While it is still not even clear where AIPR will be located, the lack of consensus in ASEAN runs much deeper than just looking for office space. It is found on many other issues besides the South China Sea, and it keeps the regional institutions weak. Even the keystone Treaty of Amity and Cooperation, which ASEAN insists all partners sign, could not stop Cambodia and Thailand going to war in 2011. The institutional weakness manifests itself in the optional way ASEAN’s members often treat its key instruments that are neither binding nor enforced.

As Crisis Group analysed in Waging Peace: ASEAN and the Thai-Cambodian Border Conflict, Cambodia first ran to the UN Security Council after the initial hostilities with Thailand in February 2011. The Council then referred the conflict back to ASEAN, then under Indonesia’s chairmanship, for further mediation. A political deal was brokered by Marty at a meeting of foreign ministers that Jakarta would send its observers to monitor the truce. But fighting broke out again in April before there were any boots on the ground.

Cambodia then went forum shopping and took the dispute to the International Court of Justice in The Hague. The ICJ ordered in July that troops be withdrawn and the monitors deployed. A year after that, with still no sign of any Indonesian observers on the border, the two sides announced they would now comply with the world court’s decision and left ASEAN playing no role in this deal.

Surin in his briefing said ASEAN was in 2012 firmly established as the mechanism for regional cooperation, but he noted members were not quite ready to hand the association a monopoly on resolving conflict. International institutions and powerful friends from outside the region were still an important option to keep on the table.

If hostilities like those between Thailand and Cambodia were to break out again in the region, what role would the AIPR play? Marty told the Jakarta Foreign Correspondents Club that the new body was neither a substitute for government-to-government talks nor for calling an emergency meeting of ministers. The AIPR was just another “menu option”. The problem is that ASEAN has many frameworks for resolving disputes, he tactfully observed, but a distinct reluctance to use them.

Instead, Marty believes the AIPR might play a useful role as a catalyst in trying to get ASEAN members to start to think that they could solve their own disputes. The AIPR would have a “track one and a half” role carrying out research and producing publications like an academic institute. It would also be the body responsible for maintaining a roster of regional experts ready to be deployed to address conflict amongst its members. If it ever got its act together, he said, it could become an ASEAN export.

But the culture of non-interference embedded in the ASEAN DNA will need to be bred out before the region will accept a roving band of peacemakers. When Crisis Group wrote in Waging Peace that an activist Indonesia in 2011 had shown how energetic and bold leadership could bring the association closer to what its supporters wished it might be, the response was swift. One ASEAN government official quickly emailed to say that, “surely there are ASEAN supporters with different views on that… not all supporters would want a more active role”.

Surin and Marty are the forward-leaning and most friendly faces making the case for a more activist ASEAN. Surin credited Marty as being the one who did the last minute cut-and-paste on the statement adopting the ADHR that saw an extra paragraph added to reaffirm that the declaration had to be implemented in accordance with the UN Charter and the Universal Declaration of Human Rights, a change human rights groups said did little to address the fundamental weaknesses of the ADHR.

In their recent addresses, the two senior diplomats acknowledge the imperfect nature of the declaration and the institutions around it. Surin ended his briefing with a plea for the membership, international partners, and regional civil society to the take the declaration and the ASEAN Intergovernmental Commission on Human Rights (AICHR) seriously. Marty, a few weeks later, had the same message.

From Rakhine State to Jayapura, ASEAN has troubling conflicts and human rights abuses to address. While all these conflicts are not all heading the wrong way, they seem to be here to stay for the moment. Despite the recent breakthrough in Mindanao, long running insurgencies from Kachin State to southern Thailand worryingly suggest that conflict in South East Asia is not only intractable but also if contained it is tolerated, factored in, and often profitable for some. It is hard to imagine the AIPR receiving an invitation any time soon to help to try to resolve this violence while politicians in the capitals remain disinterested, and security forces are so vested in keeping them going.

To its critics, ASEAN’s commitments to the promotion and protection of human rights, democracy, rule of law, and good governance are nothing but a dream. But for Surin and Marty, it is more a case of from little things big things grow. To ignore the flawed institutions, they say, is to guarantee they will never be all that they can be. The association needs to be challenged, pushed, and cajoled from inside and out. To these two boosters, the imperfect organisation they have served or nurtured needs to be given a chance – again and again.

Their message is that the ADHR and the AIPR are the last pieces of a complicated regional peace and security puzzle. It is all we’ve got and it is all we’re getting. Let’s now try to make it work.

Jim Della-Giacoma joined Crisis Group in April 2009 as South East Asia Project Director. He oversees the organisation’s work in this region, including staff based in Indonesia, Thailand, and Timor-Leste.

For more information on South East Asia please visit our regional page where you can find our reports, commentaries, podcasts, and much more.