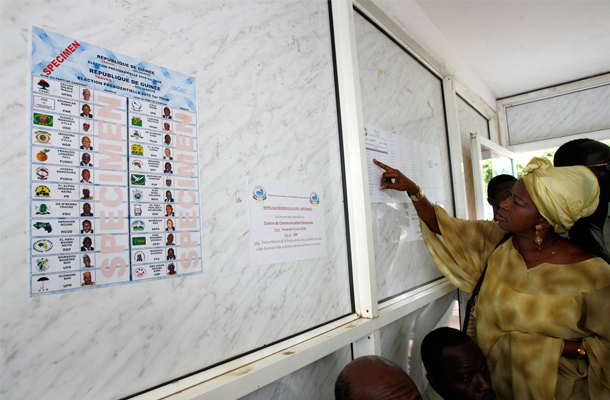 A woman checks a list near a specimen of Guinea’s election ballot at the national electoral commission headquarters in Conakry June 25, 2010. PHOTO: Reuters/Luc Gnago

On 3 July, Guinea celebrated good news: the government and opposition signed an agreement on preparation of the overdue legislative elections. This is a turning point in a two-and-a-half-year controversy, bringing an end to a cycle of protests and repression that has cost several dozen lives, almost exclusively those of opposition supporters. The signatories chose this path over options that would have put Guinea’s stability and the lives of its youth at risk. One has to acknowledge the good work of Saïd Djinnit, the Special Representative of the UN Secretary-General in West Africa, and the electoral experts from the UN Development Programme (UNDP), European Union (EU) and Organisation internationale de la francophonie (OIF), who did not shy from taking strong stands. But this is only a first step. There is no shortage of difficulties ahead. The international community needs to mobilise resources quickly to help implement the agreement, and it should supervise that implementation closely.

The 2010 presidential elections were the first really competitive contests in Guinea’s post-colonial history. In that sense they were a success, but they were also troubled by violence, ethnic politics and suspicion about procedures. One fifth of the ballots were cancelled in the first round, and it took more than four months and a Malian general heading the electoral commission to organise the second round. The new president, Alpha Condé, did little to ease the political climate. The legislative elections, due soon after, were repeatedly delayed and became the focus of political life, with the authorities trying to push their idea for procedures unilaterally and the opposition uniting to protest in the street. Eventually, all opposition parties declined to present candidate lists.

The authorities’ aversion to dialogue meant they bore a special responsibility for Guinea’s march to the brink, but eventually they decided the risks were not worth taking, while the bulk of the opposition rejected radicalisation. The result is a solid compromise, toughly negotiated, with input from international experts and including the following elements:

The electoral commission has suggested holding elections on 24 September. President Condé is expected to make that date official by decree soon.

All this is good news. But the electoral issue is not sorted quite yet. The opposition remains suspicious of the electoral commission and the rolls revision, as well as of the government’s commitment to the neutrality of the administration and public media. Off the record, opposition figures already express concerns about potential manipulation, such as undue influence over the composition of the commissions involved in electoral roll revision, “technical” delays in registration in opposition strongholds, last-minute transfer of voters in pro-opposition areas to distant polling stations and mass registration of under-aged Guineans in pro-Condé bastions. In 2010, observers noted suspiciously high voter turnout in strongholds of the major parties, and it is important that parties that are minorities in those strongholds are represented on polling station committees there. Careful implementation of the agreement is required to allay fears, build credibility for the electoral apparatus and stem violence. A focus on the timeline should not detract from the main issue: the quality of the mechanisms that are meant to install trust.

The electoral system will be tested in many other ways. There are questions about the capacity of the security forces to react without disproportionate force to violence, and not only in Conakry. Another area to consider is the system for adjudication of disputes. Observer reports on the 2010 presidential elections all noted important weaknesses: local party representatives are often not trained to make proper appeals, and the courts seem to shy from judging their substance.

All parties to the agreement will have to be committed and vigilant. This is true also of the internationals, who should not think that things are now settled and they can turn to more pressing situations elsewhere. It is crucial that observers and experts speak their minds and signal problems rather than paper them over and settle for low expectations. Also, the new controls provided for in the 3 July agreement will be expensive. The Guinean authorities will have to bear some of this cost in order to show their seriousness, but donors must make good on their financial commitments quickly enough to allow the control mechanisms to be set up and tested.

The crucial international contribution to the 3 July agreement shows that it was premature to have dissolved the International Contact Group soon after the 2010 presidential election. The unhappy experience with pseudo-elections under the late President Lansana Conté, the tension within the political class, the ethnic politics, the unresolved question of the military — all these make sustained international involvement indispensable. The West African regional organisation ECOWAS, the African Union and the UN, as well as the OIF and EU, have to work together as they did in the times of the Contact Group to help Guinea move forward. It should be a busy summer in Conakry, but also in Dakar and Abuja, Brussels, Paris and New York.